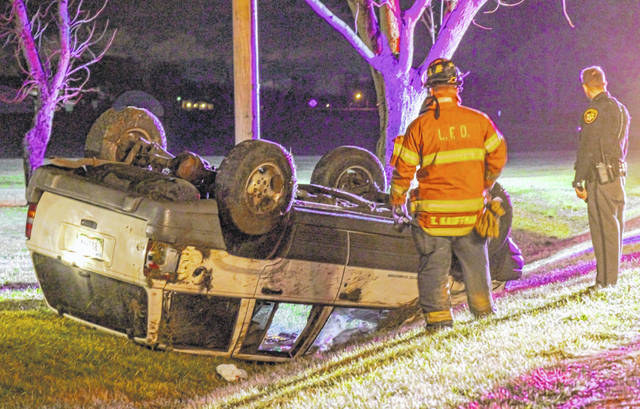 PAINTERS CREEK — The Darke County Sheriff’s Department is investigating a Sunday evening accident that has led to the recovery of a stolen vehicle out of Indiana.

At approximately 11:24 p.m., deputies from the Darke County Sheriff’s Department responded along with the Laura Fire Department and Arcanum Rescue to the 9200 of State Route 571 in reference to a rollover crash with possible injuries.

According to the Darke County Sheriff’s Office, a preliminary investigation into the crash has found that a white Jeep Grand Cherokee was traveling northwest on State Route 571 when the driver of the vehicle failed to negotiate a curve, over corrected and traveled off the right side of the roadway. The vehicle then rolled at least once coming to rest on its top in the front lawn of 9232 State route 571.

An extensive search was conducted for the driver of the vehicle who was unaccounted for when emergency personnel arrived on the scene. However, the search was unsuccessful. Upon further investigation into the matter, it was found that the vehicle was being driven with the use of either fictitious or stolen plates.

The Jeep Grand Cherokee itself was discovered to be a stolen vehicle out of Union County. Indiana. The vehicle was recovered and confirmation from Union County was requested.