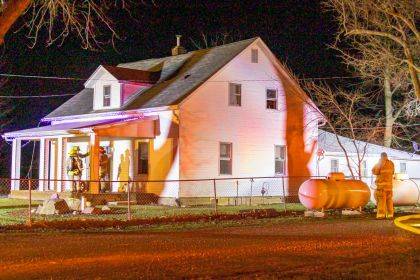 NEW MADISON- Firefighters battled a second New Year’s Day structure fire Wednesday evening after receiving a report of a residential automated smoke alarm. At approximately 5:49 p.m., firefighters from the New Madison Fire Department and Tri-Village Rescue responded along with mutual aid from The Hollansburg and Liberty Township Fire Departments as well as Northwest Fire District out of New Paris to the reports of an automated smoke alarm located at 461 State Route 121 South.

According to Captain Duane Cook of the New Madison Fire Department, crews arrived on the scene to find nothing showing from the outside. Upon further investigation and after opening a rear door to the residence firefighters were confronted with heavy smoke and flames from within.

“Due to not knowing what the situation was, we immediately called for a second alarm and conducted both a primary and secondary search of the interior,” commented Captain Cook. “It was discovered that everyone had already evacuated and were gathered out in front of the residence.”

The fire, believed to have started in the rear of the residence in a kitchen, was able to be quickly knocked down and extinguished preventing it from spreading any further and limiting damage to the point of origin.

The cause of the fire remains under investigation however, it is believed to be accidental in nature.