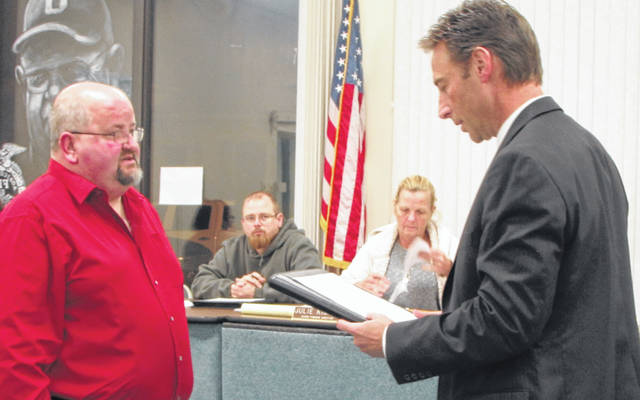 ANSONIA — Ted Adkins was sworn in as the new mayor of Ansonia at the council meeting Tuesday evening, with Attorney Travis Fliehman officiating at the ceremony.

Adkins had been on village council for nine years, not long after he moved to town.

Does he have any immediate plans for council?

“I have some things in mind,” he said. “Most everything is working good. There will be just a few changes.”

Fliehman also swore in Jeff Gariety as councilman and Dan Brown, who was reinstated to council. Brown, who like Adkins ran for mayor in the general election in 2019, agreed to stay on as councilman.

Now, there is one vacancy on the council to fill Adkins’ seat, and Village Administrator Tom Welbaum reported there are four people who have expressed an interest in filling that seat, adding it could possibly be filled in several more weeks.

Adkins had some supporters at the swearing-in, including wife Stephanie and 15 1/2-year-old son Mason.

The Adkins couple and her parents, Terry and Barb Hess, are co-owners of Ansonia Auto Parts.

“I worked there for Mark Kramer for 12 years when it was located at the Middleton building,” said the 48-year-old mayor who is a 1989 graduate of Ansonia High School.

“I worked there for about five years and then Terry and I moved into the Coppess store in May 2004. I’ve worked there a total of 20 years.”

The Adkinses were selected to serve as grand marshals for the Ansonia Fourth of July parade in 2019.

The couple has worked with the Fourth of July activities in the village in the past, and are now more involved in the Ansonia Community Pride group, which plants flowers, has business windows painted and hangs the military signs on the posts along Main Street.

In the past, Ted has worked at Midmark, Whirlpool and Huffy’s.

They are members of the Ansonia United Methodist Church, where he was a trustee until recently, and he is involved in the Scouting program in Ansonia. He, himself, had been a Cub Scout, and now his son is working on his Eagle Award through the Boy Scouts.

His hobbies, he said, include guns and remote control items, and he indicated he is an NRA fan for life.

When they were interviewed for being the parade marshals last year, the couple said they enjoy helping with projects that make the community better.

“We want to make it prideful,” Adkins said. “It doesn’t take that much time.”