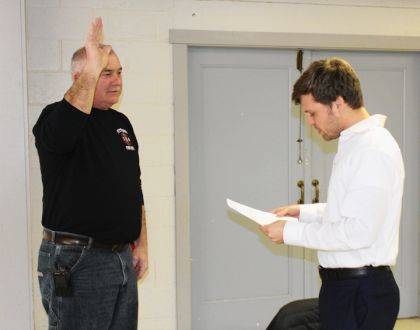 PITSBURG – Dec. 31 was the last day on the job for the Pitsburg Volunteer Fire Department’s veteran fire chief. Tal Mong resigned after 28 1/2 years as chief and over 35 years with the fire department.

On Monday, the Pitsburg Village Council accepted Mong’s resignation and named his replacement. Council’s unanimous pick was Tracy Mong, a fireman with over 34 years of experience with the department. He also happens to be the brother of the retiring fire chief.

Tracy has previously served the department as a captain and chief’s aid.

With Tal’s retirement and Dave Hofacker’s retirement a little of a year ago, Tracy pointed out the average age of the department dropped by approximately 20 years. This means he has a lot of younger firefighters in the department and he wants to train them to do the job the correct way. “Obviously, they’re going to take over,” Tracy said.

The younger department isn’t new for Pitsburg. Tracy remembers the same situation when he first came on. He said it was seven or eight years into his tenure that he was named a captain for the department. There weren’t many older firefighters at the time and he is facing a similar situation.

Following the appointment of Matthew Brookey as assistant fire chief by the village council, Tracy will have three captains spots he will need to fill.

There are currently 16 volunteers on the Pitsburg department’s roster and they are always looking for dedicated persons for positions. However, he is pleased with the firefighters he has. He pointed out that some departments have a lot of volunteers on their roster, but many of them aren’t active. Tracy noted that his volunteers are always there and are dedicated to serving the community and neighboring departments. The department went on 90 runs in 2019.

As with almost all volunteer departments, Pitsburg works hard to get the funding it needs to give its firefighters the best equipment possible. They were partially able to fund their newest engine (2017) through grant money. A lot of their turnout gear and other equipment are funded through grants as well as assistance from the Pitsburg Volunteer Fire Department’s Women’s Auxiliary. “They help out a lot,” said Tracy.

One of the ways the auxiliary assists the department is through its annual Bingo event. Originally held at the fire department, the Bingo event outgrew the facility and is now held at Franklin Monroe Schools. This year’s Bingo will be held March 28, from 6-9 p.m. 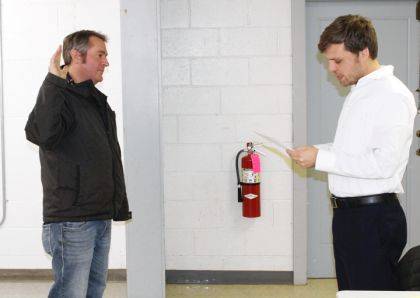