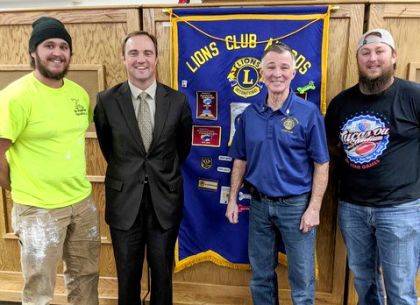 UNION CITY, Ind. – The Union City Lions Club got the year started on a great note with their first meeting of the year held on Jan. 14.

Twenty-three Lions and three guests enjoyed the meal and an informative program by Lion Larry Amspaugh and Union City Mayor Chad Spence. Larry, Chad, and a group of people are the driving force behind A Community Christmas, Union City’s annual Christmas light display in Harter Park.

A Community Christmas had another record-breaking season in 2019. There were 6,700 cars that drove through the park between Thanksgiving and the end of the year. That was an increase of over 1,200 cars from 2018. Donations totaled $23,324.53 for 2019, up just over $5,000 from the year before. The gift shop was a hit again bringing in about $7,500 for the vendors who were there, and Santa and Mrs. Claus were enjoyed by many kids and parents alike. Groups from the area manned the gates in the evening and were given 25 percent of the gate receipts from that night.

The Union City Lions manned the gates on two different occasions and saw just over 1,000 cars come through the park and raised $953 for the club. The 3-D glasses that enhanced the lights were sold and were a hit, especially with the kids. Larry thanked many people and organizations that helped with the display.

The Randolph County Tourism Bureau provided funds for a billboard along I-70. Larry said in the first four days after the sign went up A Community Christmas had 130,000 hits on social media. A group of people repainted all the “cards” in the park and a $4,400 grant from the Community Foundation of Randolph County, Inc. will help to fund a new sound system.

Mayor Chad Spence spoke of the “humble beginnings” of A Community Christmas 15 years ago and how it has grown and informed the Lions Club there is an effort underway to turn the bridge in the park into a covered bridge. Mayor Spence would like the bridge to be dedicated to all former and current Lions Club members in Union City.