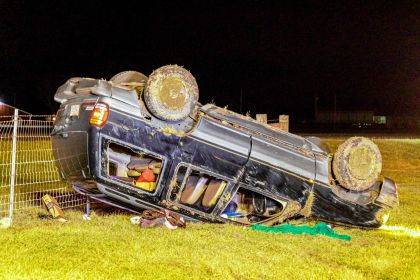 ARCANUM- A driver was injured Friday evening after being involved in a rollover that left their vehicle resting on its top.

At approximately 7:39 p.m., emergency personnel from the Arcanum Fire Department, Arcanum Rescue and Deputies from the Darke County Sheriff’s Department responded to State Route 49 and Arcanum Bears Mill Road on a two-vehicle rollover crash with injuries.

According to the Darke County Sheriff’s Office, a preliminary investigation into the incident has revealed that a White Dodge Dakota driven by a juvenile was traveling northbound on Alternate Route 49 north. The vehicle attempted to cross the intersection and continue northbound onto Arcanum Bears Mill Road. The Dodge Dakota traveled into the path of a Black 1998 Mercury SUV driven by Ashley Finfrock, 31, of Greenville. Ms. Finfrock swerved to miss the Dodge Dakota that entered into her lane of travel and lost control of her vehicle. Ms. Finfrock’s vehicle went off the roadway and overturned. Ms. Finfrock was treated on the scene by Arcanum Rescue prior to being transported to Wayne Hospital for the care of non-life threatening injuries. The juvenile driver of the Dodge was not injured in the incident.