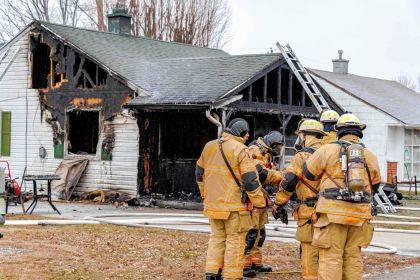 GREENVILLE – A second alarm fire claimed a family home and pet Saturday afternoon after what is believed to be an accidental fire caused by a child playing with a lighter.

At approximately 12:51 p.m., emergency personnel from the Greenville City Fire Department responded along with Greenville Township Fire and Rescue, Greenville Police Department and several mutual aid departments to the 100 block of West Harmon Drive in regards to a working structural fire.

According to Greenville City Fire Chief Russ Thompson crews arrived on the scene to find heavy smoke and flames consuming the front of the residence. Firefighters were able to quickly knock down the fire and, despite heavy winds pushing the flames, prevent the blaze from spreading to nearby structures. Chief Thompson added, “In the course of a preliminary investigation, and matching witness statements, it was discovered that the fire had been started in the front living room of the residence by a small child playing with a lighter. The child inadvertently set a large stuffed chair ablaze.”

At least three juveniles were in the front of the residence when the fire began and at least four adults were located in the rear of the structure. “Despite the findings that there was only one smoke detector in the entire residence, which was not in working order, the adults were somehow alerted to the smoke and located the children before everyone was able to safely evacuate out of the back door of the residence.”

Chief Thompson continued, “There are a few different lessons to be learned from today’s misfortunes. Fire education, working smoke detectors in the home and the practice of keeping lighters and the likes of them out of the reach of children are all very important safety aspects to be exercised.”

No injuries were reported to either the occupants of the home or firefighters battling the blaze. A family dog was found to be in the residence at the time of the fire and despite being released from its kennel during the families evacuation, the pet’s life was lost in the blaze.

The American Red Cross was requested to the scene to aid in the families displaced by the incident.

The cause and nature of the fire will remain under investigation by the Greenville City Fire Department.