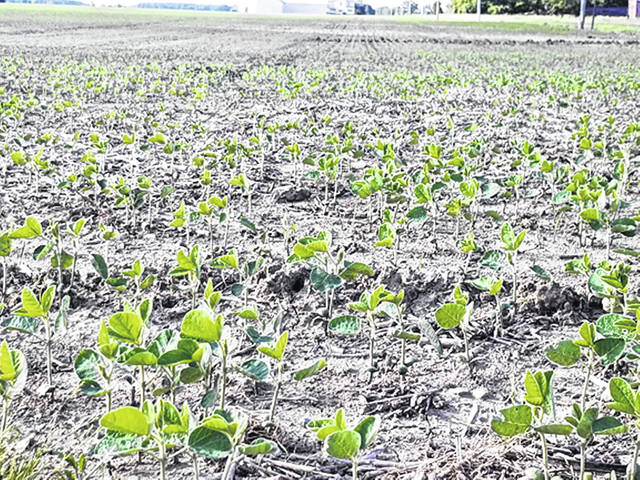 GREENVILLE — When a call for data was made, area county corn and soybean farmers stepped up to the plate to answer.

It was just last month when the 2019 Yield Survey was sent out to farmers with questions such as planting and harvesting dates, maturity rates, yield, and moisture after a rough year. The survey based upon one conducted by Dr. Emerson Nafziger in Illinois with Ohio and Indiana results to be combined.

“I was very happy with my Darke County growers,” continued an appreciative Custer with the county providing 50 responses, the most in the state, compared to the next highest, which was 40 from Sandusky County. The information provides valuable data to gauge not only what farmers have had to deal with but create recommendations for the future.

When we have an odd year such as 2019, how it affects us, was the question.

Darke County is the largest corn and soybean producer in the state of Ohio, but wet weather took its toll last spring. County fields went primarily empty well beyond the typical planting period. In May alone, the county received over nine inches of rain when the average should be in the four-inch range.

The state-wide survey data shows how the excessive rain resulted in predominately late planting dates, which made for sporadic yields. Corn was off by an estimated 40 bushels for early planting, and late yields were “really bad,” explained Custer.

Soybeans fared similar to corn with a downward trend in yields the later into the planting season.

Custer noted the data was a confirmation to his expectations, though he was surprised at the later plantings that did yield better results than expected across the state.

Still, “we’ve taken a tremendous hit for planting corn late, soybeans not quite as much, but it is still a hit,” continued Custer.

Where do we go from here with the data?

“We will continue to analyze this,” said Custer with the hope they will never need to use the information. However, the data is there should they need it, allowing for recommendations including what maturity levels to plant, when, and how hard to push early planting versus a late planting.

Further, the data shows that Darke County farmers were not alone in their struggles. They faced similar challenges as other farmers across the state.

It also means, “every farmer out here in Darke County is hoping that we don’t have another 2019 spring,” said Custer.

Unfortunately, the National Weather Service (NWS) is predicting above-normal rainfall leading to another potential round of challenges come spring 2020.

There is some hope as NWS notes it does not look as bad as 2019—at this time.

For now, it is a wait, with Custer again expressing appreciation of those who responded to the survey.

“Not only will it benefit them in the future, but it will definitely benefit the whole state,” said Custer. “Good people here in Darke County respond whenever we put the call out.”