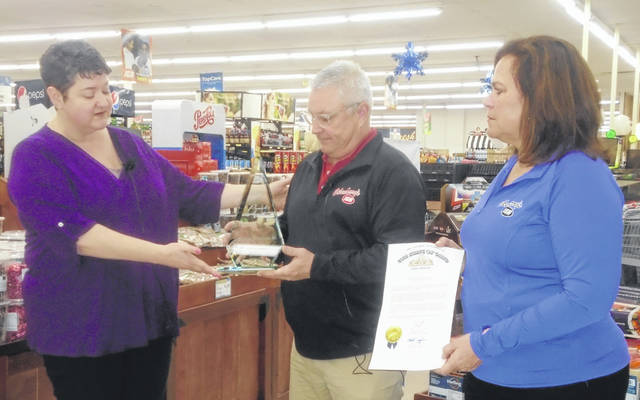 GREENVILLE — Eikenberry’s IGA Foodliners of Greenville was honored Thursday morning by the Ohio Grocers Association (OGA) with its highest honor, the Pinnacle Award.

“Our Pinnacle award recognizes two retailers a year; one, a larger operation, and the other, a small operation,” said OGA President/CEO Kristin Mullins. “You are among the best of the best.”

She said some of the requirements of the award are based on community involvement, human resources and merchandising.

“I didn’t realize this was a really big deal,” said Mark, who accepted the award with his wife by his side. “We’re 90 years and going to keep on truckin’. Thanks for your support.”

Among those in attendance from the OGA in addition to Mullins was COO Shane Schaefer.

“It’s in the third generation,” she said.

Much of Eikenberry’s IGA Foodliner’s longevity is attributed to a dedicated staff of 60 employees and a family atmosphere. “We have staff who have had great-grandparents working here,” said Mark, “and so many loyal customers that they end up as extended family, too.”

“The Pinnacle Award represents the best retailers in the grocery industry,” said Mullins. “Eikenberry’s Foodliner is a perfect example of industry excellence, and Gretchen and Mark Davis are great examples of ownership concerned for both the industry and the community.”

A special video was being made as a result of Thursday’s presentation, with cameramen getting quotes from locals concerning the grocery store. That special video will be recognized at the Ohio Grocers Association’s Annual Brown Bag Celebration of the Industry on April 25 at the Irongate Equestrian Center in Hartford, Ohio.

Mark concluded, “Gretchen and I are honored to receive this award on behalf of Eikenberry’s. This is certainly a team effort, as our fabulous staff and wonderful customers make it a joy to come to work, thanks to all of you. Thanks also to all our vendor partners and SpartanNash in particular,” he said of the distribution company.

Cupcakes, made in the Eikenberry’s bakery department, were offered to those in attendance.

The Ohio Grocers Association is the leading voice and advocate for Ohio’s grocery industry, and is headquartered in Columbus.

For more information about the Pinnacle Awards or the Ohio Grocers Association, contact Mullins at 614-442-5511 or email [email protected]