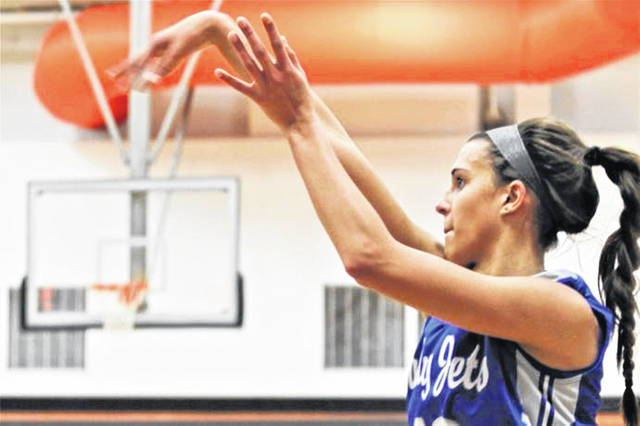 FORT RECOVERY – The Franklin Monroe Lady Jets traveled to Fort Recovery and came away with a 56-43 non-conference win over the MAC (Midwest Athletic Conference) Lady Indians in Tuesday night play.

“That was a big one for us,” Franklin Monroe coach Abbey Moore said of the win. “We have been preparing for this one for a while – just extremely proud of the effort and determination that every single one of my girls gave tonight on the floor.”

Franklin Monroe took advantage of 10 Corina Conley first quarter points including a 3-pointer, a Stella Shellabarger trey and a Chloe Peters free throw to outscore the home team 14-10 win one period in the book.

The Lady Jets dismantled the home team in period No. 2 taking the quarter 16-4 sending the teams to the break with Franklin Monroe holding a commanding 30-14 lead.

“That was the story of the night – the defense there in that second quarter,” Moore stated. “That was all determination.”

“Chloe Peters played five times bigger than what she was,” continued Moore. “Chloe Brumbaugh with her on ball defense really frustrated them in that quarter. Just so very proud of the way we played defense tonight.”

Conley added 6 second quarter points both coming by way of two 3-pointers, Shellabarger chipped in with 4-points including 2-2 at the line, Belle Cable knocked down a triple and Peters added a field goal.

Franklin Monroe doubled-up on the Lady Indians in the third, taking the quarter by a 14-7 count with Conley going 6-6 at the line, draining a 3-pointer and hitting a 2-point goal good for 11 third period points. Chloe McGlinch added a trey for the Lady Jets sending the teams to the final period of play with FM leading 44-21.

The Lady Indians battled back taking the final quarter by a 22-12 score only to come up short against the Darke County girls giving the Lady Jets a double digit 13-point win over a very good Fort Recovery team.

The Lady Indians came into the night with a 10-3 record with one of their losses coming at the hands of the Versailles Lady Tigers, 42-40.

“I kind of took us out of our game plan that fourth quarter and that was to just slow the game down a little bit in the half court,” said Moore. “That just kind of lost our momentum and that’s on me in trying to work the clock there at the end. That changed our mindset on the offensive end.”

Conley led Franklin Monroe and all scorers with a game high 30-points including four 3-pointers while going 8-9 at the charity stripe.

“Corina was motivated tonight,” noted Coach Moore. “We felt like last year we had one slip away against this group. They are a great ball team and they tested us at times tonight. It always seems like when we need Corina, she is always there. She is a phenomenal athlete and she was able to come up big tonight.”

“We are playing really well right now,” Moore concluded. “This is a good time to do it but at the same time we know we haven’t hit our peak. We still have work to do and hopefully we keep it rolling.”

The Lady Jets burned the nets for 83 percent at the free throw line making 19-of-23 tosses.