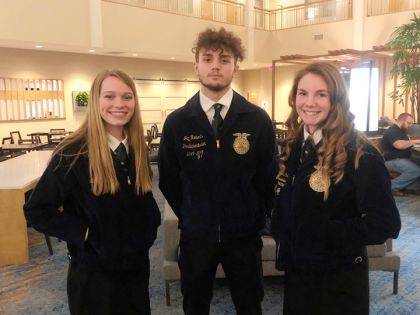 BRADFORD – Leadership, according to the Oxford dictionary, is “the action of leading a group of people or an organization.” Even though the definition seems simple, being a leader is not so easy of a task. As a leader, you must be able to inspire others. You must show qualities of honesty, communication, innovation, and much more. Behind every great organization is a set of strong leaders.

During the weekend of Jan. 18 and 19, a handful of members of the Bradford-UVCC FFA chapter had the opportunity to attend the 212-360 Conference. These were two different leadership conferences, 212 being for seventh through 10th grade students, and 360 being for 11th and 12th graders.

Both the 212 and 360 conferences strive towards developing great leaders and to help students grow in the FFA. The 212 conference is named for the temperature at which water boils. At 211 degrees, water is right on the brink of bubbling up to a boil, but by simply adding one more degree, it gets it to the next level. By using this analogy, this conference focuses on the growth of each individual and pushes them to add more effort to get to that next level, even if it’s just by one small step. This conference accomplished this by incorporating the themes of virtue, growth and collaboration.

The 360 conference uses the analogy of a circle. If you’ve ever taken geometry then you should know that 360 degrees creates a circle. This conference encourages students to take a full circle approach in the development of chapter leadership. Instead of focusing on the individual, this conference aims to develop and advance local chapters as a whole by focusing on every angle that could create action plans for a chapter. The themes that assist in this goal are action and influence. During the 360 conference, leadership sessions were held to implement the themes of this conference.

Along with focusing on leadership development, the Bradford members were able to connect to FFA members from other schools. Activities were held to increase teamwork and with that, new friendships. A dance was even held where all the members could mingle and have a blast.

The Bradford members that were present at these events returned with a new vigor. The memories and friends made became a nostalgic recollection, but the lessons and skills they learned over the weekend prepared them to implement these into their very own chapter. The conferences provided the students with the tools, ideas and time to develop action plans for their chapters, communities and personal lives. Now, confidently, they will impact the future of not only their chapter, but the future of the agriculture industry itself.