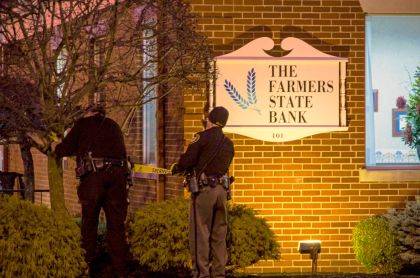 NEW MADISON- A large police presence could be observed Friday evening as Darke County Deputies searched for a suspect in what was described as a strong-arm robbery at the Farmers State Bank of New Madison.

At approximately 5:50 p.m., deputies from the Darke County Sheriff’s Office responded to the Farmers State Bank of New Madison, located at 101 South Main Street, after the reports of a possible armed robbery.

According to initial reports, a male subject dressed in a Carhartt jacket, blue hoodie, black jeans and tan slippers exited the building with what witnesses described as two Walmart bags filled with cash. The suspect, who was observed heading south on Main Street in his attempt to get away. He was not reported to be armed.

Darke County Deputies are looking for a red or burgundy crew cab pickup truck that is believed to involved in the robbery.

Patrons of the New Madison Supermarket, located across the street from the bank, gathered in a discussion about the events that had just unfolded in the normally quiet village. “I believe it was back in the 1970s when the bank was robbed by a younger person on a bicycle,” reminisced one customer.

“Without a police department of our own, it was just a matter of time before it would happen again. It’s a shame it has to happen here so close to home,” commented another.

The robbery remains an active investigation by the Darke County Sheriff’s Department. Additional details will be released as they become available.