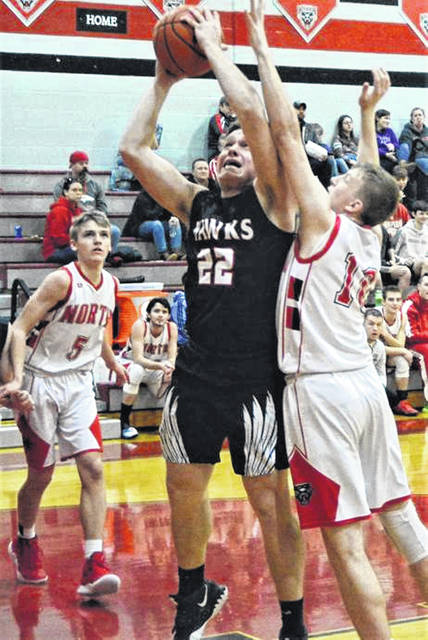 LEWISBURG – In workmanlike fashion the Mississinawa Blackhawks dispatched the Tri-County North Panthers. An opportunistic defense generated points off of turnovers and the offense was able to create scoring opportunities both inside and outside. North had a tough time establishing an offensive rhythm and the Blackhawks were able to make some nice plays in the second half to win going away 59-42.

Coach Tim Barga; “Blake Scholl has been our high scorer almost all the year. He shoots well, he rebounds, he gets a lot of shots from put backs.”

Defensively the Blackhawks stayed in man-to-man defense the whole game. They focused on Panther Dylan Stinson who still rang up a game leading 20-points – but was held scoreless in the fourth quarter. Alex Scholl and Max Dirmeyer shared duties on covering Stinson, but Scholl would get into foul trouble and eventually foul out.

Coach Barga on Stinson; “Stinson is a good player and he can shoot from any place. He’s a big plus for their team. I didn’t think that we did a bad job on him, he just figured out a way to get around us. We put our best defensive players on him and he was still able to score.”

At halftime it was 30-23 in favor of the Blackhawks. North did go to a full court defense in the second half where they tried to trap the Blackhawks in a bid to get back in the game. They would give up bonus to the Blackhawks early in the fourth quarter. The Blackhawks ended up scoring a total of 15-points from the foul line.

The Blackhawks were particularly effective in working the clock and getting easy baskets in the last quarter. They worked the perimeter on offense and then someone would make a back door cut to the basket for an easy layup. A frustrated North team could find no way to climb back into the game.

Coach Barga on the game; “I thought North played pretty good against us. They have some nice players, but they did have 1 player out. Now we missed some easy shots, but we rebounded well. Our defense was good. They did penetrate some against us, but our foul shooting was good in the second half.”

On their big game Friday against league leading National Trail. “The Trail game was not going to be important unless we won this game. So we put all of our emphasis on this game. We have tonight, tomorrow, and the next few days to get ready for that game.”