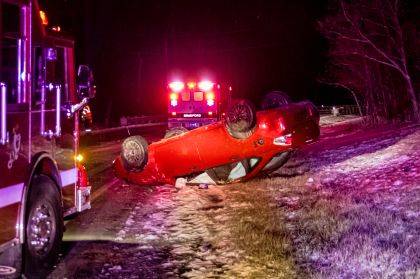 BRADFORD – Four people were able to escape serious injuries early Friday morning after adverse driving conditions led to a rollover crash that left the vehicle on its top.

At approximately 2:42 a.m., emergency personnel from the Bradford Fire Department, Bradford Rescue and deputies from the Darke County Sheriff’s Department responded to the 8500 block of State Route 185 on a single-vehicle rollover crash with possible injuries.

According to the Darke County Sheriff’s Office, a preliminary investigation into the incident revealed a red Ford Focus was traveling eastbound on State Route 185, just west of Zerber Road, when the vehicle swerved to avoid a deer crossing the roadway. The driver then lost control of the vehicle on the snow-covered roadway, which resulted in the Ford rolling at least once and coming to rest on its top along a ditch.

The male driver and his three passengers were all able to exit the vehicle safely and under their strength. All occupants of the vehicle were treated on the scene by Bradford Rescue for minor injuries prior to refusing any further treatment and transport to a medical facility.