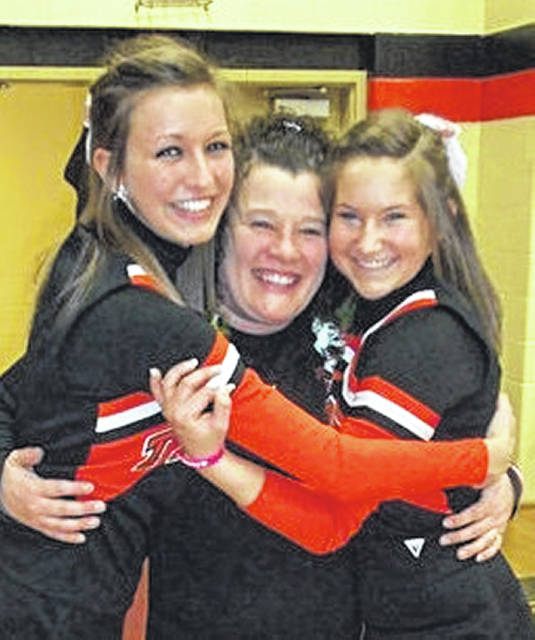 ANSONIA — Kami Shinn Phlipot was recognized at a recent ball game in the Ansonia School gymnasium for 15 years as cheerleader adviser.

“There was a nice speech and an award,” she said. “All the cheerleaders were in line and handed me flowers, one at a time with a hug. Plus, my family members were there with flowers.”

Even though she has stepped down from being an adviser, she still plans on attending games.

“When my daughter, Lexi, was young, she was cheering pee wee or youth cheer,” Phlipot said. “During that time, the coaches had decided to stop coaching so another mom and myself decided to take it over. I coached the youth cheer for two years and that was just the beginning.”

She herself cheered five years while a student at Ansonia.

Phlipot found a lot of satisfaction in being an adviser.

“I loved every minute of it…from tryouts, to summer competition, to football cheer and then basketball cheer,” she said. “Our season usually started the first weekend of June with competition camp. We would practice all summer to get ready for upcoming competitions. Watching the girls learn, help each other, bond and exceed were some of the best things about coaching.”

She went on, “For me, it was always so much more than just building cheerleaders. It was building young ladies into amazing women, positive role models and mentors. Over the years, we went through loss of loved ones, trouble for a few, life changes, many of the issues that all girls go through. However, when you are part of my team, we help you get through the tough times together.

She said cheerleading is important because it sets a standard for the school.

“It gives the little girls something to look forward to and helps build student support and spirit at games and also helps some young ladies turn their lives around.”

Phlipot doesn’t even want to guess how many young girls’ lives she’s touched.

“For some I was their first coach and their last coach,” said Phlipot. “Mackenzie (Miller) Stewart and Sarah (Amspaugh) Bey were two that I coached in junior high and then moved up to high school and finished out with them as well. A lot of the ladies I had for several years. My biggest squad was 21 and my smallest was two, so it was all over the place. Class sizes play a big role in the numbers.”

Her squads used to be comprised of junior varsity cheerleaders and then moved on to varsity.

“The last couple of years, the freshman ladies have been cheering varsity due to low numbers,” the retired coach said. “Right now I have five freshmen who cheer the freshman game, the JV game and then right back into it for the varsity game. They cheer three games per night sometimes three nights a week.”

“We also do the 4th of July parade, the Little Mister and Miss Red, White and Blue pageant, any tailgates, the KMS Pink Out game and our Little Tiger Cheer Day,” she said.

What made her a successful adviser?

“Patience, dedication, the love of cheer and Ansonia Schools and a loving supportive husband and family,” she answered. “When you coach for more than three or four years, you get into a routine and things come easy. The rules are not new and the girls know what to expect. It got easier for me every year, and I had a huge bunch of people who helped and supported me along the way.”

“If I could change something about cheerleading, it would be the amount of respect these people get from the fans and the athletes,” Phlipot said. We don’t get a lot of support, we have our dedicated 10 as we call them that cheer with us but that is about it. These ladies work their tails off to come up with new stuff and to try and keep the fans pumped up. They deserve the respect…if one time we could get a crowd at a competition like some of the other schools do, it would be amazing! When my son was in high school, the football players would come to the Darke County Fair competition and wear their jerseys. We need to bring that back!”

She is married almost nine years to Tj Phlipot.

“Tj has been one of Ansonia’s football coaches for 10 years,” said Phlipot, who works at Midmark. “He also coaches junior high baseball and high school bowling. My son, Andrew, a 2012 graduate of Ansonia, has also helped with the football team and baseball team. My daughter, Alexis, and my son-in-law, Max, are 2018 graduates of Ansonia. Lex was my assistant coach the year after she graduated, and they live in Virginia Beach, Va.”

Why is she retiring?

“I wanted more free time to travel and see Lexi and Max,” she said. “He is in the Navy so they will be different places and I want to go see them. I also want to help Andrew work on his house.”

She will still go to games.

“I have nieces and nephews at Ansonia who play sports so I will still be there,” she said. “I just want to thank Ansonia School, the fans, the athletes my assistant this year, Eelyse Shilt, and the junior high coach, Ericka Kramer, who is moving up, for making my last year the best one yet!”