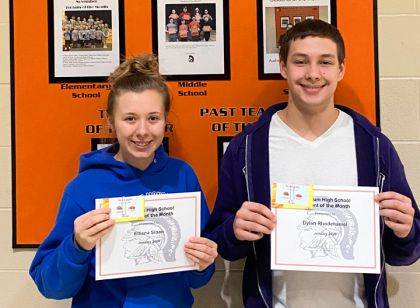 ARCANUM – Students of the Month for January from Arcanum High School are Dylan Rhodehamel and Elliana Sloan. Selections were made by the faculty on the basis of accountability, honesty, and service demonstrated at Arcanum High School.

Rhodehamel and Sloan were nominated because of the accountability, honor, and service that they demonstrate at AHS.

Rhodehamel was nominated because of the effort and service that he demonstrates to students in his classes.

Sloan also leads through service at AHS. She is a great help to elementary students in class. She works to make a difference each day.

The Student of the Month program is sponsored by Chick-Fil-A and McDonald’s.