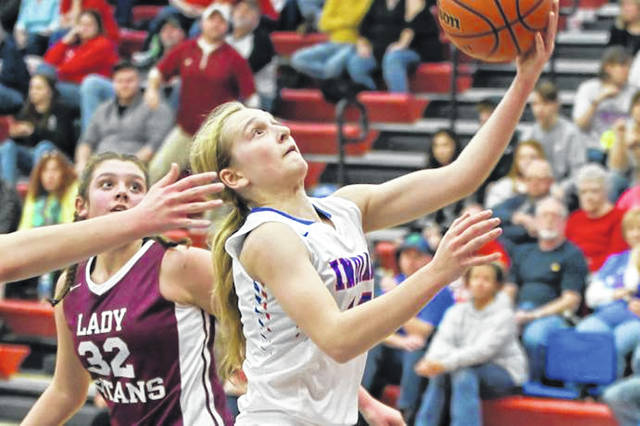 UNION CITY, Ind. – The season came to an end for the Union City Lady Indians Friday night after falling to the Tri Lady Titans 63-50 in the semifinal round of the IHSAA Class A sectionals.

“It’s been an interesting season with a lot of up’s and down’s. We’ve had some big wins and some close losses,” said UC head coach Sarah Black.

“Over all I think that we have grown as basketball players and as people and we’ve been forced to look at others not just in the light of basketball, but in the light of their lives and how it affects them. As always it has been a joy coaching these girls and watching them grow,” she continued.

As the final buzzer sounded at Friday night’s sectional loss, the emotions took over for many Lady Indians…especially the senior players.

“We have to say goodbye to our seniors – Mackenzie Green, Maddy Cox, Daisy Smith and Luzy Corona,” Coach Black sadly pointed out. “These girls have had an incredible impact on me and their teammates. I don’t think that any player quite realizes how much they influence those around them until months or even years later.”

“I hope these ladies know that they will forever be a part of Lady Indian basketball and a positive influence on the success at Union City. It’s never easy to say goodbye to a group that you know will be moving on with their lives, but you are also excited to see what the future holds for them,” she tearfully concluded.

Union City was led in scoring in the sectional semifinal by Skylie Lutz with 27 points and seven rebounds, Mariah Claywell added eight points and eight rebounds. The team finished the season with a 16-8 overall record.