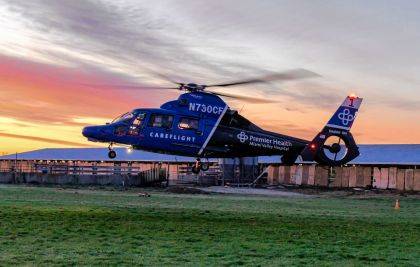 WILLOWDELL – A motorcyclist was seriously injured Friday morning after colliding into the rear of farm equipment on a rural road outside of Willowdell. At approximately 6:21 a.m., emergency personnel from Osgood Fire and Rescue responded along with Deputies from the Darke County Sheriff’s Department and CareFlight to the 14100 block of Willowdell Road in reference to a motorcyclist unresponsive after having crashed into the rear of farm equipment.

According to the Darke County Sheriff’s Office, a preliminary investigation into the incident has revealed that a black 2017 Kawasaki Vulcan motorcycle, driven by 61-year-old Robert Goubeaux of Versailles, was traveling south on Willowdell Road when Goubeaux struck the rear of a southbound 2013 Bobcat Skid loader, driven by 35-year-old Nicholas Dirksen of Yorkshire. The force of the impact resulted in Goubeaux’s motorcycle traveling off the left side of the roadway where he was ejected.

Goubeaux, who was wearing a helmet at the time of the accident, was treated on the scene by Osgood Rescue for what were described as life-threatening injuries prior to being transported to Miami Valley Hospital by CareFlight. Dirksen was uninjured in the incident.