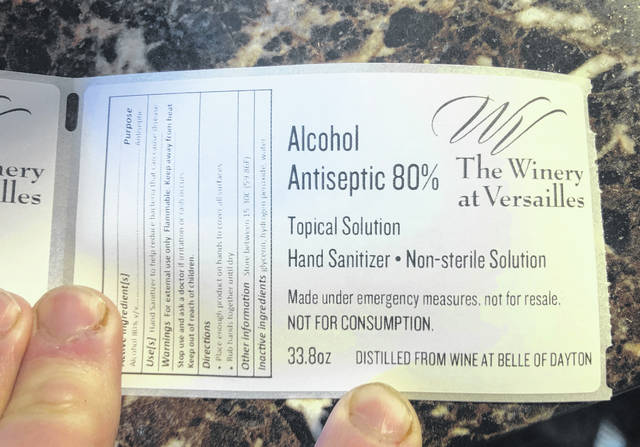 VERSAILLES — Mike and Carol Williams, owners of The Winery of Versailles, have joined forces with the owners of a distillery in Dayton to turn a thousand gallons or so of excess wine into hand sanitizer.

Mike said he had some wines that would have required some additional fine-tuning in the cellars before release. Since his tasting room is closed during the coronavirus pandemic, chances are his bottle sales are going to be lighter than usual in the coming months, even though The Winery still sells wines for carryout and can deliver in Ohio.

His idea, it was noted, “Why not distill the wine into the primary ingredient of a product in great need — hand sanitizer?”

“Wineries are not permitted to produce high-proof alcohol, so I began reaching out to distilleries in the region about the idea,” he said. “When I called Mike LaSelle, co-founder of Belle of Dayton distillery with Murphy LaSelle, I found my match.”

They said that LaSelle even arranged to come pick up the wine and transport it to Dayton for distilling, a process that will take a Belle of Dayton crew four days of working 12 to 14 hours a day to complete.

The Belle of Dayton founders announced March 22 that they were going to begin producing hand sanitizer, to be either donated to first responders and hospitals, or, if there are enough ingredients and packaging available, to be distributed to the public for donations.

Williams said the Winery at Versailles will get about one-third of the finished hand sanitizer product.

“We will give it away,” Williams said. “We’re contacting front-line health care organizations and first responders to find out who has a need for it.”

Mike’s wife and partner in business, Carol, said she is not sure yet how much hand sanitizer has been made.

“We sent 1,000 gallons of wine,” said Carol. “That will be distilled to around 100 gallons of alcohol. To that they add glycerine and additives. Not sure what that volume will be after that. We will get 1/3 of finished product. Not sure as this won’t be completed until Wednesday (today) or Thursday.”

What are her thoughts about The Winery’s contribution to society right now?

“We have always felt that giving back to our community is the right thing to do,” she said. “This was a need we could fill and are honored to do it.”

She said her husband had contacted a few distilleries and Belle of Dayton answered back.

“We worked with Mike, Tim, and Murphy LaSelle,” Mike said.

“I know others are also doing it,” she said.

Do the Williamses have anything to do in the processing of the product?

“We just provided the wine to distill,” she said. “We will distribute locally to mainly police, EMT, etc. We need to see how much finished product we have and what size containers. I am thinking it will be more ‘industrial size’ like a quart or so. I will know much more as soon as we pick it up. We should have it by next week.” 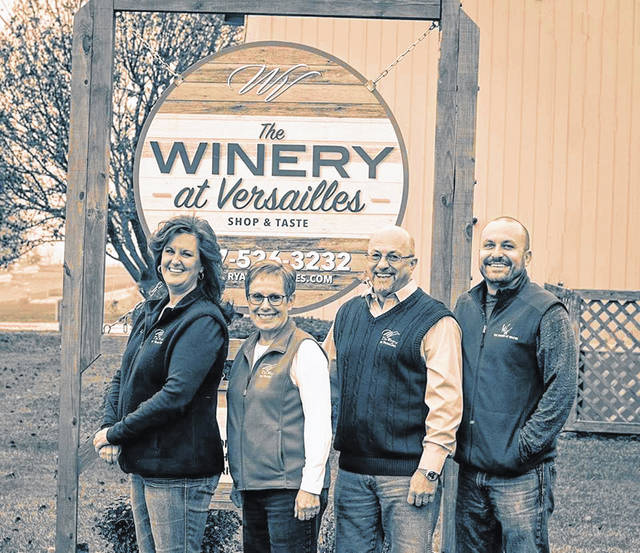