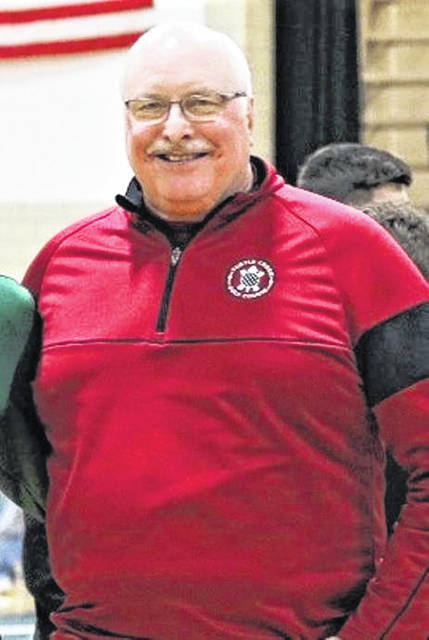 Franz earned the prestigious record, a record the 6’6” Franklin Monroe center set in the 1966-1967 season with 43 rebounds in a game against the Covington Buccaneers eclipsing Strasburg’s, Frank Wallick’s reb0und record of 42 set in 1960.

“I was a tall awkward boy that could jump,” said Franz. “I couldn’t shoot well. It was not for several years until I got better so I just determined that I needed to get the ball to play.”

“I would get the ball and give it to the other guys and beat them down the floor and if they missed I could put it back,” continued Franz. “I would get baskets that way…so it was the way I could play.”

Franz averaged 22 points and 24 rebounds his senior year for a Franklin Monroe team that finished the season with a 22-1 record.

“It was a big deal in high school and I was a ‘High School Harry’ like everybody else,” Franz said of his high school days. “I thought it was a big deal but I got humbled in college. Every guy I played was 6’10”, 6’11” and I’m a center…I’m 6’6”. I was a back to the basket player, a rebounder and led the fast break. I liked to lead the fast break.”

Franz went on to play basketball for the Charleston Southern University Buccaneers, a Division I school playing in the NCAA Big South Conference where he was a four year starter at the center position, was the University’s MVP his freshman year and still holds several of the schools records.

An auto accident between his freshman and sophomore season kept Franz from walking for six months causing the CSU center to “miss a good bit” of time on the court.

While playing at CSU, Franz became the University’s first player to score more than 1,000 points and pull down over 1,000 rebounds in a career while averaging 16 rebounds and 14 points a game over four seasons of play.

A 1971 CSU graduate, Franz was inducted into the University’s Basketball Hall of Fame on May 9, 1989, the university’s first class of inductees.

After graduating from CSU, Franz joined the CSU coaching staff as an assistant men’s basketball coach and played for the Charleston All-Stars, a team that played all the ACC teams that barnstormed the countryside.

Franz had an opportunity to play against some of basketball’s greats including NBA Hall of Famer Wes Unseld. Franz’s college roommate guarded Pistol Pete Maravich “and held him to 63 points,” Franz said with a chuckle.

Franz shared several words of advice to athletes wanting to succeed at the game of basketball.

“Whatever drills they do be first. Any ball that goes up it’s yours…go get it and they’ll play you,” Franz said. “They have to play you if get them the ball and you’re the first one down the floor. Work hard. Listen to what they tell you and you’ll succeed…everybody can’t be the leading scorer.”