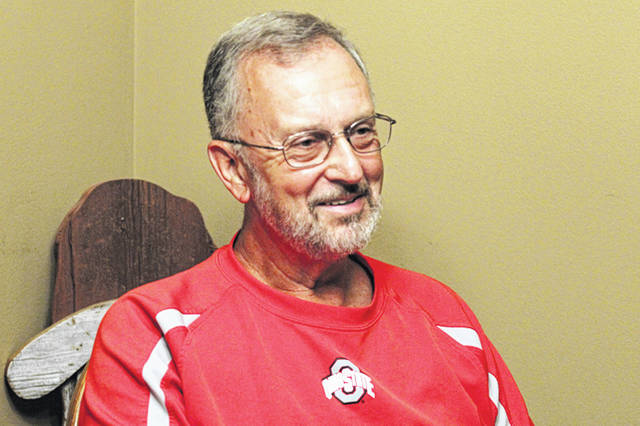 Kukasky graduated from Woodridge High School in a class of 114 students in Cuyahoga Falls, OH located between Akron and Cleveland where he lettered in four sports, football, basketball, baseball and track, graduating in 1967.

Baseball was Kukasky’s sport of choice when a baseball game and a track meet fell on the same day. “Baseball was my preference, so baseball came first.”

On the baseball team he batted just under .400 as a senior, played both catcher and centerfield with more time spent behind the plate. Kukasky was quick to point out he did not do distance in track but high jumped and did some relays.

Kukasky was a starting guard on his school basketball team that went to the Regionals his senior season, making it to the sweet sixteen playing in the Canton Fieldhouse.

“I started out as a running back my first couple of years,” said Kukasky. “Switched over after my brother graduated and took his spot as a wide receiver.”

Kukasky played both ways on the field, playing mostly cornerback and some outside linebacker on the defensive side while receiving offers from small colleges in Iowa, Michigan and Ohio with an invitation to attempt to walk-on at Kent State but chose to attend nearby Cedarville College (University).

While at Cedarville, Kukasky met his wife Susan, a native of the Indianapolis area.

“I met Sue at Cedarville,” noted Kukasky. “She was a year behind me. I was a sophomore and met her as a freshman in the lunch line.”

The couple have two children, both GHS graduates.

Son, Mike attended Taylor University and finished up his degree at IU East and now teaches at Mississinawa Valley.

Daughter, Kelly (Kukasky) Gates graduated from Taylor University, is married to Nathan Gates and have two children, Taylor a ninth grader and Camden a sixth grader.

Kelly and Nathan make their home in Silver Lake, Michigan near Grand Rapids.

Thom and Sue made their way to Greenville when Thom was hired by Anthony Wayne School to run the physical education and physical therapy programs. While there Kukasky started the school’s basketball, baseball, softball and track programs.

In 1975 Thom was hired by Greenville City Schools not only teach, but coach as well.

“I came to Greenville and they said we will hire you only if you will coach, so I coached golf and track that first year,” said Kukasky. “We were league champs that year,”

Kukasky did earn a varsity letter on the Cedarville College golf team so the sport was not new to the young coach.

“Had some good golfers – kids probably knew more than I did,” Kukasky chuckled.

A young GHS graduate, Steve Gruber returned home after graduating from Cedarville to teach and take the head Track and Field coaching job at his alma mater and brought Kukasky on to coach the junior high track program.

Kukasky filled many roles coaching football at Greenville including, seventh grade, eighth grade, freshman but most of his time was spent with the varsity program coaching mostly quarterbacks, linebackers and cornerbacks.

When Kukasky took over the Lady Wave head basketball coaching job, he inherited a team with nine consecutive losing seasons and soon turned the team around only having two losing seasons over his 10 years at the helm.

“I don’t know what my record was,” said Kukasky. “To me its ilrelevent. The only game that matters is the next one. Those weren’t my wins anyways. I didn’t get to play, I didn’t get to shoot the ball – it’s all the kids, they’re the ones that get the credit for it.”

One year under Kukasky the Lady Wave went 16-4 in the old GMVC, a very good league.

“Just proves that kids that are on the page together and everybody is sold into the program together, they don’t care about themselves but they care about the team, they can do things because we weren’t great basketball players,” Kukasky said of his good teams.

“Everybody gets better during the basketball season,” said Kukasky. “The difference is made out of season. Some people will work and they’ll get better. Other people won’t work until next season and they will fall behind. You can’t remain status quo. You’re either falling back or you’re progressing with others and if you get enough people to do it – then we would be good.”

“I loved coaching,” continued Kukasky. “The really good times in reality aren’t as good as it seemed and really bad times in reality are not as bad as it seems, so overall it was a good experience. For the most part kids bought in to what we were doing. When they didn’t, it was not fun coaching, but when they bought in and they put their teammates and everything else above themselves, then we had a lot of fun.”

Coach Kukasky believes there is a role for parents in their children’s sports, but also believes coaches must be afforded the opportunity to coach the team without distracting interference.

“I’m not saying parents shouldn’t be involved,” said Kukasky. “They are emotionally going to be involved and that’s great, but if a parent can’t put the team above their child then they need to keep quiet because that’s dissension.”

“We go out every night and preach teamwork, teamwork, teamwork,” continued Kukasky. “Sacrifice for the good of the team. We try and say it doesn’t matter who scores if we win at the end of the game. Then they go home and they say, ‘well, they’re not getting you the ball enough, you need to score more.’ That’s where it’s wrong. People put their kids on the pedestal and what they are trying to do is promote their kids. I understand that, but if they’re that good you don’t have to tell people – they already know it, so don’t brag on your kid because when they do something bad it’s going to embarrass them. So don’t brag on your kid. Let somebody else brag on your kid.”

Kukasky weighed in on the old adage, ‘a coach is hired to be fired.’

“Coaches are to be motivating the kids, are they good for the kids, are they teaching them principles that will carry on over into regular life,” said Kukasky. “If they are doing those things, then that’s ok, but on the other hand I hate mediocracy. It makes me sick. I want to excel. I want to be the best I can be.”

“I had a team once that we was 2-18 in regular season and those kids played their hearts out and I was proud of them,” added Kukasky. “Most of the teams I had were over achievers. They would accent on the positives and build those up so that they could become the very best that they could be. That’s going to benefit in life when they go into business, when they have families they are going to learn how to handle adversity, they are going to learn how to handle all these things thrown at them and they are going to succeed because they are mentally tough. That’s the important thing, not mediocracy. ‘Oh, my kids on the team, he should to get equal time – no, that’s not the way life is.”

Coach Kukasky believes if rules and regulations are in place and parents and athletes agree at the beginning of the season to abide by them, they need to be followed, not bent, not broken.

Kukasky is very thankful for his years coaching, but his strong belief in following the rules brought his coaching career to an abrupt halt.

“If they are not going to follow the rules then they shouldn’t have them,” Kukasky said. “If they are going to have them they need to follow them. That is why I left the first time. There was an incident and it involved some discipline. I wanted to discipline and wasn’t allowed to do it, so I said fine – you’ll have to find a new coach and I left.”

“I hated to leave but we had just gotten back from Kent State and it was mostly freshmen and sophomores. I only had one junior, no seniors and we went on that trip. We were 6-4 with freshmen and sophomores, so we had a lot coming. I thought we have some good times ahead of us but they wouldn’t let me do what I needed and if I can’t control the atmosphere of the team then …….”

“Give me control, let me do what’s right,” Kukasky said. “If I’m doing something wrong then fire me, otherwise let me run the team.”

Since retiring, the Kukasky’s have had time to travel both at home and abroad including France, England, Alaska and Hawaii.

Thom has made two mission trips to Haiti and the couple are very active teaching Sunday School and Children’s Church at Northside Community Fellowship.