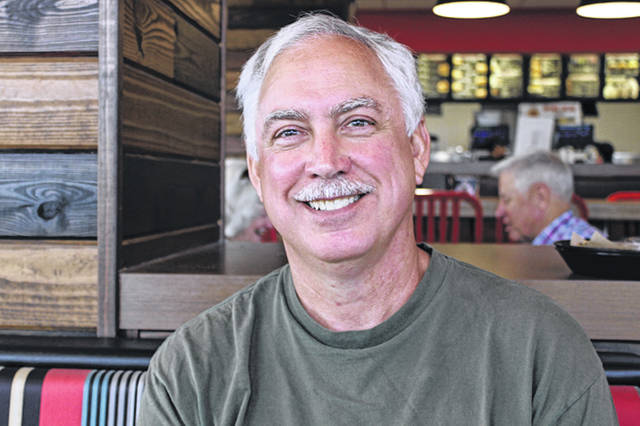 A 1975 Arcanum graduate, Cline played basketball for Coach Richard Graeff and participated in track and ran cross country for the Trojans.

“We lost the first game of the tournament,” Cline said of his senior basketball season. “We were seeded second, lost to Mississinawa Valley. MV went to state with the Gelhaus boys. We beat MV by double figures a week before but they got us that night and they went on to state.”

“They got rid of me (graduation) and went to state the next year without me,” Cline said with a chuckle.

Cline is married to Karen (Trick), a Dayton native and moved to the Franklin Monroe school district her freshman year where the couple met in high school.

“We didn’t date until college,” said Cline, “and she snagged me.”

The Clines have three children; Erin, Jonathan and Kelly.

Cline started teaching Marketing Education at GHS, a co-op program and a spent has final three years with the Virtual Academy.

Cline began his coaching career at 23 years of age taking over the FM varsity cross country and track programs.

Both the JV and varsity boys basketball coaching positions at FM opened for the 1985-86 season giving the young coach a choice.

“I basically had the choice which one I wanted,” noted Cline. “I looked at Dave Gray (FM Principal) and I said nobody knows better than you what it’s like to sit in the hot seat, I said, I would like to try that so I got the varsity position.”

“In ’89 those guys mostly graduated but we came back and went back to the district finals again. We lost to Cincinnati Country Day that year,” recalled Cline. “Back in ’87 we lost to Columbus Wehrle in the Regionals and in’90 beat (Cincinnati) Seven Hills for the District Championship. They had beaten Tri-Village who was undefeated that year. We played Springfield Catholic in the Regionals and we lost to them in overtime. They were state runners up.”

“That was a real nice four year run going to at least the district finals each year,” Cline said. “It was pretty rewarding.”

“It’s not just the good teams,” noted Cline. “There are teams that didn’t do as well but gave every bit as much effort, they just weren’t quite as talented.”

Cline’s nine year coaching career at FM ended in 1994 before taking over at Arcanum in early season “after a game or two,” said Cline. “I had Arcanum for a year and we knocked off state ranked Kenton Ridge in the tournament that year.”

Cline then took the Ansonia varsity boys basketball job for three years, the ’96, ’97 and ’98 seasons.

“1998 we knocked off Franklin Monroe in the tournament,” Cline stated. “They were seeded second – a big win.”

“The biggest thing was in ’97 with Ansonia,” said Cline. “We lost by 70 points to Versailles and they did not run the score. It was just that type of game and the next year we beat them, so it was a real nice turnaround when we knocked them off. They were seeded in the tournament. That was the regular season that be beat them, but they were just the No. 1 or No. 2 seed that day – that Saturday morning in the tournament draw.”

“The Arcanum job opened back up so I went back to Arcanum in ’98 for six years,” said Cline. “Good kids – we just really didn’t put things together.”

“One the highlights was playing Marion Local at our place towards the end of the season. They were ranked No. 1 in the state and we were ahead of them at halftime. People were taking pictures of the scoreboard. They beat us by seven or eight points. Just one of those games you look back and say, we gave it a good effort.”

“I would say with every stop, I’ve made lifelong friends,” noted Cline. “That’s been the one good thing about moving around. I have people all over I have become very good friends with forever.”

Coach Cline understands the old saying, ‘coaches are hired to be fired.’

“I would have been very happy to have stayed at one place the whole way,” said Cline. “I know sometimes when you lose a job they say – well, you’ll get another one someplace else and obviously I did, but people don’t sometimes understand you put your heart and soul into that program, not just that group of kids, but the kids coming up as well. It’s real hard to leave a place when you’re not wanted, but some of those places I left on my own.”

“The first six years I coached we lost to private schools every year in the tournament,” recalled Cline.

“I was never that bothered by it even though the first six years I coached we did not lose to a public school in the tournament, it was always a private school,” shared Cline. “Where the problem comes in and it comes in now a days in the public schools as well with open enrollment, it’s kids changing. If you have a private school and the kids have come up through their program, I don’t have a problem with that.”

“Dunbar just lost two kids and that’s not fair to Dunbar, to their school, to their program, to their coaches, to their teammates,” continued Cline. “You see the same thing is happening in smaller schools now where kids for whatever reason change schools. You don’t want to recruit kids but good programs will sometimes attract people to the program. I guess that’s what I don’t like whether its public school, private school – kids changing schools in midstream.”

The now retired coach had a handful of advice to parents of today’s junior high and high school athletes.

“The most important thing is support them and if there is a concern, call a person up,” said Cline. “I was never opposed to a phone call, a legitimate phone call that they’re concerned about their child. Don’t talk about other kids – what can my son or daughter do to get better, what can they do to earn more time and not come in with accusations and so-forth.”

“You hear it all the time – my child’s not with the right click, or isn’t the manager of the bank or president of the bank. I’ve not know too many coaches in my 30 some years of coaching that didn’t want to win.”

“It doesn’t mean you can’t express a concern,” added Cline. “Go in with the appropriate manner and not just go in with a grudge and rip people.”

Since retiring in 2015, Richard and Karen have have visited all 50 states.

“Two big trips out west with Thom and Sue Kukasky. We got state No. 50 – North Dakota and for anybody that is trying to get all 50 states, save North Dakota for last. If you go to the Fargo welcome center and tell them it’s your 50th state, they are going to give you a t-shirt, put you on Facebook, give you a certificate and a pen for saving the best for last. It is pretty cool.”

“We’ve been to over 30 countries, 5 providences in Canada, been to Antarctica, South Africa and Russia,” continued Cline. “We are very blessed. Everybody says do things while you can and that’s what we’re trying to do. It’s been an incredible ride so far.”

Richard and Karen just recently returned home from a 15 day cruise to South America on Celebrity Cruises that turned into a 30 day cruise due to Covid-19.

“We couldn’t get home because of the virus,” said Cline. “We were supposed to get off at San Antonio, Chile on March 15th. They had just closed the port and we weren’t permitted to depart.”

The cruise ship spent two day circling while negotiating to dock at the Chilean port.

“We were supposed to have an excursion that day and and then go to the airport in Santiago and fly home,” Cline stated. “They wouldn’t let us off the ship. We weren’t allowed to dock so we circled for two days in the waters off San Antonio. When that didn’t work out they decided we were going to go to San Diego.”

After being turned away by the Chilean government, the cruise liner headed to Valparaiso, Chile for supplys.

“We anchored off-shore for three days waiting for our supplies,” said Cline. “Itook us five days to get resupplied and then 10 days to go to San Diego, so our 15 day cruise turned into 30 days.

“We got to San Diego on March 30th and flew from San Diego to Charlotte,” Cline noted. “Our flight from Charlotte to Dayton – there was a pilot, a co-pilot and two flight attendents and four passengers, Karen, myself, a young lady and a young guy.”

“We were supposed to go to China in October but we cancelled that one,” concluded Cline. “We have three trips planned for next year and hopefully those will all go through.”