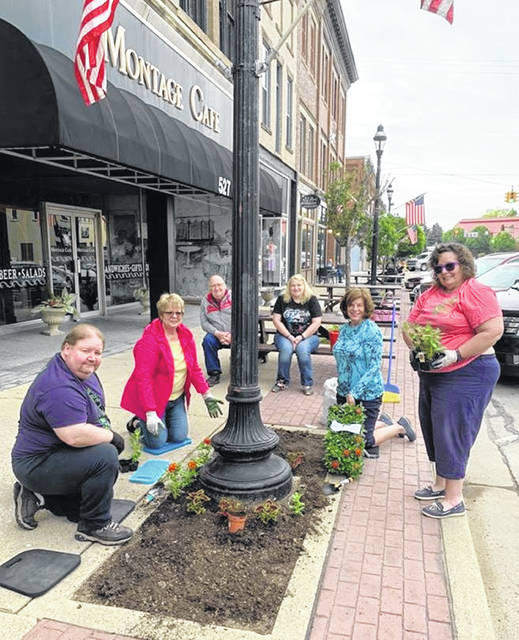 GREENVILLE — Thanks to the Adopt-A-Block project, downtown Broadway got a facelift a couple of weekends ago on May 23.

“Up and down South Broadway, approximately 50 flower boxes and 19 flower pots were planted,” said Berry. “Main Street Greenville seeks adopters for the boxes. I thought it might be more difficult to find people and businesses to adopt boxes and pots this year, but I couldn’t have been more wrong. Even with everything going on this year, the response was overwhelming. We had individuals, businesses and organizations adopt the boxes and pots. There are plaques on each of the boxes and pots. If you like seeing the flowers, let the adopters know.”

He went on, “If you look down South Broadway, you will see every other box has flowers. The other boxes have trees. The pots are on each corner and around the Traffic Circle.”

He estimated around 100 people were downtown planting flowers all along South Broadway that day.

“There were a lot of individuals, businesses and organizations that planted their own boxes and pots, but we also had a ton of volunteers that planted boxes and helped us lay the mulch and water the flowers,” he said. “I’ve been telling people since businesses started opening up that I could not be happier to have a hard time finding a parking spot. My first few weeks on the job I had my choice of parking spots. To look up and down Broadway and to see so many people enjoying the social aspect of being with friends and family and doing something good for the community…there is nothing better. I was stopped by so many people congratulating me and telling me how wonderful everything looked. I’d like take credit it for it, but I really can’t. It was really Hillary Holzapfel and our design committee that did most of the work. I just organized the names and boxes and helped wherever I could.”

Berry said, with him taking over the executive director’s position a little over a month ago, he did have to hurry to get up to speed on the program.

“Hillary Holzapfel, owner of Final Bow and coordinator of the event, was a huge help,” he said. “The design committee had already picked out the flowers they were going to use. They also decided give the pots a facelift by painting them. She handled all of that and the pots look incredible. There are four different designs and I think they look incredible.”

He also noted that Main Street Greenville appreciates the City of Greenville for its investment of time and money into downtown Greenville.

“They are currently finishing up the stamped concrete project and have installed new trash cans and reinstalled the benches and bike racks,” he said. “Along with businesses re-opening, downtown Greenville is coming back to life after two months of little to no activity due to the pandemic. If you haven’t been to downtown lately, now would be a good time to come downtown and shop or dine at our great businesses.”