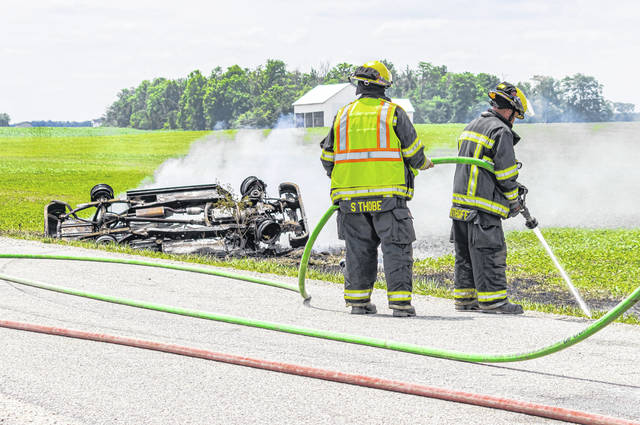 At approximately 11:56 a.m., emergency personnel from the Osgood Fire Department responded along with deputies from the Darke County Sheriff’s Office to the intersection of Darke Shelby County Line Road and Sherman Road in reference to a single-vehicle accident and vehicle fire.

According to the Darke County Sheriff’s Office, a preliminary investigation into the incident has revealed that a U.S. Postal Service vehicle from the Versailles Ohio Post Office was delivering mail traveling southbound on Darke County Shelby County Line Road north of Sherman Road. The driver of the vehicle attempted to pass a piece of farm machinery causing the vehicle to inadvertently travel off the right side of the roadway. The USPS vehicle struck and broke off a utility pole bringing down power lines before rolling and coming to rest on its side.

The female driver of the USPS vehicle was able to climb free of the wreckage with the assistance of passing motorists prior to the vehicle becoming fully engulfed in flames. The driver was examined on the scene and found to be uninjured in the crash, refusing medical treatment and transport to a medical facility.

Representatives of Pioneer Electric reported that a resulting power outage to the general area has left an undetermined amount of customers without electrical service. There was no immediate time frame of when the repairs would be completed to restore service to those customers.