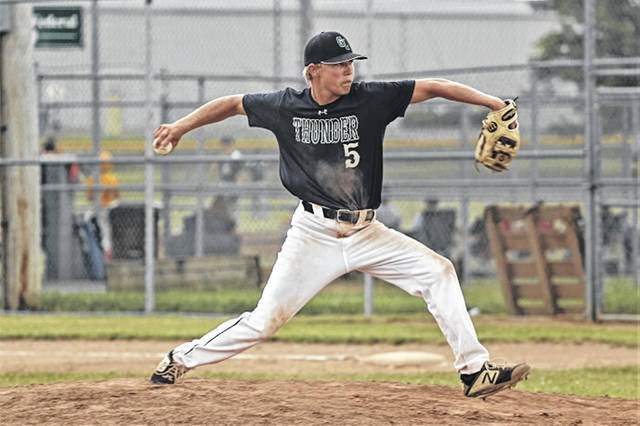 “We had some really good pitching performances this weekend,” said Greenville Thunder coach Chad Henry. “That was really nice to see.”

“Alex (Kolb), Grant (Delk), Tyler (Beyke), Trent (Collins) all threw well,” Henry added. “Tyler & Alex have done an amazing job starting for us so far this summer and Brody (Williams) has been the ultimate fireman whenever he has been called upon.”

Greenville battled back from a 4-0 deficit to even the score at 4-4 before dropping the opening game of the tournament 5-4 to Utica.

The Thunder team came out swinging to grab an early lead in the team’s second game defeating host Lancaster Post 11 by a 12-3 score in the 7 p.m. contest.

“Tytan (Grote) has been knocking the cover off the ball all summer, which is great to see because a month ago he couldn’t connect on a soft toss,” said Coach Henry. “The kid loves to compete and it’s fun to watch him step in right now with guys in scoring position. And after playing a tremendous first base last year, he has been a wall behind the plate this summer.”

Greenville scored on single from Grant Delk, Reed Hanes and Brody Williams in the opening inning.

Lancaster scored two runs in the top of the third only to have Greenville answered with two in the bottom of the inning using an Alec Fletcher tripled to score one run and a Zac Longfellow RBI.

Greenville scored four runs in the fourth inning with Brody Williams, Fletcher and Longfellow each driving in runs for the Thunder.

Greenville pounded out 11-hits in earning the win with Delk, Williams and Longfellow each with 2-hits.

Greenville split the weekend taking a late lead to defeat Athens 5-3 in a Sunday game. Down 3-2 in the top of the sixth inning the Thunder scored on a stolen base with Brody Williams at the plate before singling to drive in a run.

The Thunder took an early 1-0 lead in the top of the first getting a RBI single off the bat of Tytan Grote.

Greenville delivered eight hits in the victory paced by two hits each from Grote and Williams in the Thunder’s error free defensive gem.

“Johnny (Reser) has really stepped up this summer,” Henry stated. “He has been thrown in at second base, the outfield and behind the plate and has played good defense at every position. He is currently rocking an on-base percentage over .600, so is always finding a way on base. He’s a really fun kid to watch play.”

Tyler Beyke earned the win tossing five innings while allowing three runs on seven hits, striking out five and walking one. Trent Collins threw two innings in relief out of the bullpen recording the last six outs to earn the save.