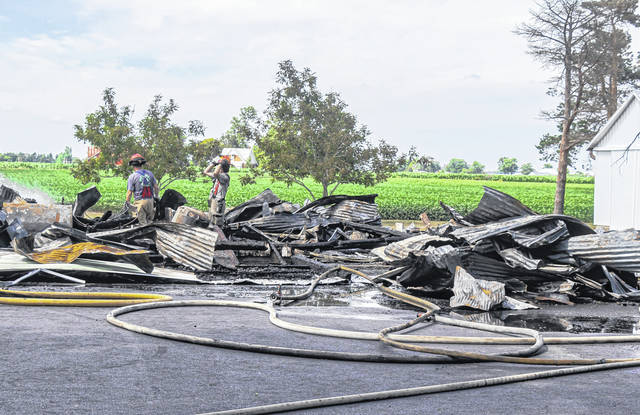 LAURA — Fire fighters from multiple departments across at least two counties battled a second-alarm fire that razed a barn to the ground Wednesday afternoon.

At approximately 2:09 p.m., emergency personnel from the Laura Fire Department responded along with the Pitsburg Fire Department, Arcanum Rescue and multiple mutual aid departments to 9234 Delisle-Fourman Road in reference to a fully evolved barn fire. According to Chief Tracy Mong of the Pitsburg Fire Department, crews arrived on the scene to find a large wood frame barn fully engulfed in fire with heavy smoke and flames showing. Crews were able to bring the fire under control protecting and limiting damage to the nearby home and outbuildings.

“We are so grateful to all of those who are here to help,” said property owners Jeff and Arvilla Brandon. “We noticed the smoke coming from the barn and by the time we called 911 it was just consumed.”

The barn, as well as its contents, were all lost in the blaze.

“The more I think about what was in the barn, the more it breaks my heart,” added Mr. Brandon. “All the tools, a couple golf carts, a generator…I could never remember everything. Our cars weren’t in there, we can be grateful for that.”

No injuries were reported as a result of the fire. Damage to the nearby home and surrounding outbuildings was described as heat-related damage from the massive blaze. The siding on the home could be seen melted at the rear of the structure while the inside of a nearby smaller barn was described by Mr Brandon as being gutted.

The cause and nature of the fire, although believed to be accidental, will remain under investigation by the Laura Fire Department.