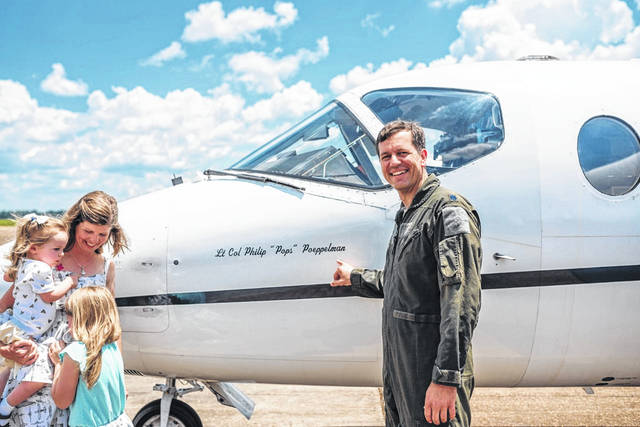 VERSAILLES — Lt. Col. Philip W. Poeppelman, CAP, is returning to his old stomping grounds in a farming community near here.

“I am currently on what is called terminal leave, using up all my saved vacation days,” said The U.S. Air Force Golden Triangle Composition Squadron Commander. “I will officially be retired on Sept. 1.”

The native Darke countian is looking forward to his future back home.

“One of the main reasons for coming back to the area is to be closer to family,” he said. ” We are also coming back because of my family farm. My wife and I want to raise our kids on a farm. When growing up on the farm, I never thought I would be a farmer. However, after being away from it, there are a lot of things I miss about. I like farming, the openness of the land, and the peacefulness. I like not having to deal with traffic. During my military career, we lived in the city of few times. When at Joint Base Charleston, we lived five miles from base and one morning it took me 55 minutes to drive to work. I am looking forward to not having much traffic.”

Poeppelman served the military for 20 years.

“I was assigned to Wright-Patterson AFB in Dayton for one year prior to attending the Air Force Specialized Undergraduate Pilot Training at Columbus AFB, Miss.,” he recalled. “After completing pilot training, I was assigned to fly the C-17A at Charleston AFB, S.C., where I also went on two deployments). Following that, I flew the C-17A at McChord AFB in Tacoma, Wash., with two deployments. Then, I was assigned to be a T-6A Texan II instructor pilot at Columbus AFB, Miss. While in Mississippi on this assignment, I deployed to Afghanistan for six months. I then went back to the C-17A at Joint Base Charleston and went on another two deployments. My final assignment was back in Columbus, Miss., as a T-1A instructor pilot.”

Poeppelman, who has earned eight Air medals for his combat missions and three Meritorious service medals for performance, is the son of late Fred and late Mary Poeppelman, and he is married to wife Liz and they have two little girls.

“My wife, mother-in-law, and I plan to farm and I was offered and have accepted a position as a pilot for UPS Airlines,” he said. “I plan to slowly get back into farming with the help of two uncles who still farm.”

He and Liz were married in 2006, but have known each other for all but about four months of his Air Force career.

“My little sister introduced the two of us. She and Liz were in AFROTC in college together and roommates,” he said.

When did he know he wanted to make the military his career?

“Probably not until 2012 when my initial 10-year pilot training commitment was up,” he said. “It was at that point we decided to stay in the Air Force for 20 years and achieve the retirement status.”

The 1996 graduate of Versailles High School graduated from The Ohio State University in 2000 with a degree in aviation management and earned a master’s degree from Air University, Maxwell AFB, Ala., in 2012.

He is a member of the Civil Air Patrol, Aircraft Owners and Pilots Association, Experimental Aircraft Association and Friend of the 99’s.

The 42-year-old concluded, “The Air Force was really good to me. I was allowed to lead, fly pretty cool airplanes and participate in some really neat missions. I’ve flown around the world from east to west. I’ve flown to all seven continents. I participated in Operation Deep Freeze, which is the Air Force support of the National Science Foundation in Antarctica. I’ve made an impact on numerous Air Force officers along the way. I’ve had the opportunity to lead and probably, most importantly, take care of the people in my units so they were able to accomplish the Air Force mission.” 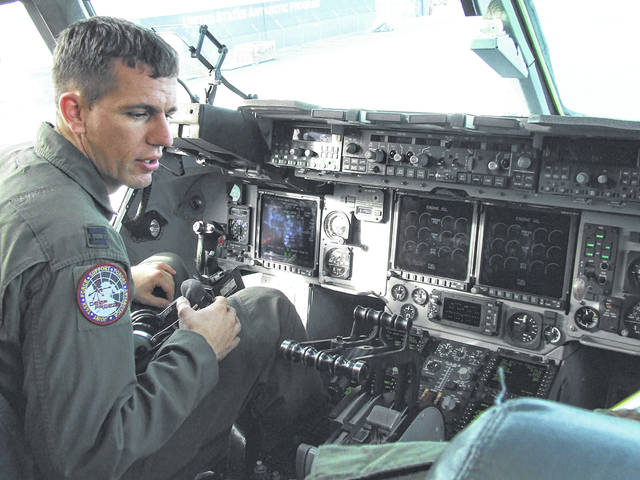