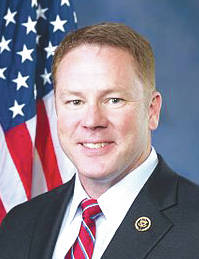 DARKE COUNTY — Congressman Warren Davidson (R) was in Darke County Tuesday, August 11, for a visit to New Madison. During his time in New Madison, Davidson toured the local library, the fire department, the water treatment facility, and a number of small businesses in the area.

Following his visit, The Daily Advocate spoke extensively with the Congressman about COVID-19 and his future plans to address CARES Act spending and monetary inflation. He also touched briefly on absentee voting in Ohio and how he is confident that Ohio residents will be able to successfully request and submit absentee ballots.

The interview began by Davidson outlining his opinions on how the coronavirus has been handled in Ohio and throughout the country.

“It’s sort of like watching game film during the season,” he explained. “It was an instantaneous, shut-everything-down, reaction to what was going on in Italy, and I think when you look back, it was an overreaction by most places, and a reaction that wasn’t precisely targeted, as well. Looking back, we should have focused heavily on the high-risk populations, by age, by health condition, and by living condition. So, nursing homes, for example, account for a huge portion of the early fatalities.”

Furthering this topic, Davidson touched on the role of the federal government and executive authority in working to combat the virus. He noted that the federal government spends a considerable amount of money on research and development through the CDC and National Institutes of Health, but also expressed concerns about the overuse of executive authority to get things done.

“I think the federal government has a lot of resources on it, but when you look at public health in general, it’s not something that the immediacy of it is federal,” Davidson said. “The challenge of it is figuring out the smart thing to do. Looking back, using the Defense Production Act was a big win, it was a huge win on food safety, for example, and continuity in the food supply chain, and that was largely done with executive authority. But, [we need] some clarity about the limitations of this authority. We’re going on five months now of largely executive authority measures being used by governors and public health officials. I think there’s more that the federal government could do to reign in states use of executive authority.”

Davidson recently introduced the Flexibility for States and Localities Act in Congress to address how CARES Act funds are being distributed. The bill seeks to address language in the CARES Act that stipulates that federal funds must be used for coronavirus related expenses. The issue, Davidson confirmed, is the ambiguous definition of what coronavirus related expenses are, or what they have become since federal funds were initially distributed.

He continued, “… the great news is, while it’s still horrific, [coronavirus] isn’t as big, on scale, as the initial funding was provided to deal with. So, now you’ve got states that have far more dollars that are COVID specific than they can spend because their COVID direct expenses haven’t been as big as each state had initially feared. Given that this money is already printed, and before we print more money, the plan is that we should make sure we have a way to make use of the money we already have, and this relates to feedback that I got from Gov. DeWine and Treasurer Sprague.”

In line with the concerns of the previous question, Davidson formed the Sound Money Caucus to address inflation. He explained the term quantitative easing, which, put simply, means that the federal government prints money without a lender. In essence, the money being printed doesn’t come from anywhere, which drives inflation.

“I’ve been concerned with inflation since before I was in Congress, mainly during the 2008 financial crisis when the term quantitative easing was introduced,” he explained. “This essentially dilutes the value of all the money already in circulation, and people have said for a long time that it has not resulted in inflation, but they are looking in the wrong places. What’s being inflated are securities… which in part provide stability to the economy. Wages haven’t been inflated, so people don’t feel it, but their buying power is being distorted in a way that undermines the dollar as a store of value and efficient means of exchange. Outside of our economy, it has weakened the U.S. dollar as the world’s global reserve currency, which has huge implications for our country economically and on national security fronts because we use the power of the dollar to follow the money on terrorism operations or use the dollar as leverage for sanctions.”

Changing gears, the Congressman was questioned on the difference between mail-in and absentee voting, and whether or not he believes the practices to be inherently fraudulent. Ohio, he explained, operates on an absentee voting system, which is different from the mail-in voting system used in California, for example.

He furthered this by explaining that, “… [Ohio voters] do mail in absentee ballots, but in states like California, they have systems where they mail out ballots to all registered voters, it’s not a system where you request a ballot. In Ohio, when you request a ballot, you provide identification, you provide the address at which you want the ballot, you provide signatures, you have a deadline, and there’s one designated place to drop ballots if you can’t go to the post office. There are so many more safeguards in Ohio because we have implemented our own system, like a tracking system so that you can know the board of elections received your request and received your ballot, so your vote has been counted.”

He also discussed the practice of ballot harvesting in states that allow outright mail-in voting.

“What started the concerns from the President was Speaker Pelosi’s bill that would implement the practices going on in California across the whole country,” Davidson said. “And one of the worst abuses there is what is known as ballot harvesting, which is where all the ballots mailed out to everyone are rounded up and returned to anonymous drop boxes that require no voter identification, and provide no limitation on who can drop them off. So, all in all, I think it is possible to do an absentee system like in Ohio, but I know that I don’t have confidence in a system like what was used in California.”

In the final question, Davidson briefly touched on coronavirus relief in the future.

“This relates to my Flexibility for States and Localities Act, which sums up part of it,” he said. “Before we further undermine the value of everyone’s dollars, by printing more money, we should make sure that we have use for existing funds. I think there are some things that could probably receive some additional funding, but it’s a much more limited bill than even the Senate has proposed. The Senate bill that came out was better than I was expecting, I’m not sure I can support where the Senate’s proposal is, and I know for certain I can’t support what Speaker Pelosi proposed in May, which is $3.5 trillion, with a lot of bad stuff including the vote-by-mail system.”

To conclude, Davidson said his visit to Darke County was exciting, and that his time spent in New Madison was great. Warren Davidson is running for reelection in 2020 for Ohio’s 8th Congressional District. 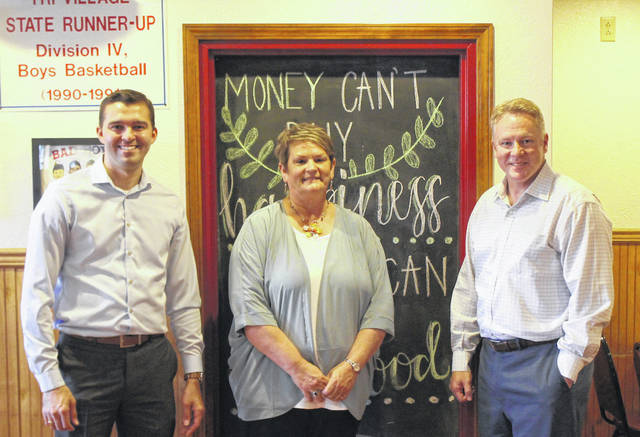