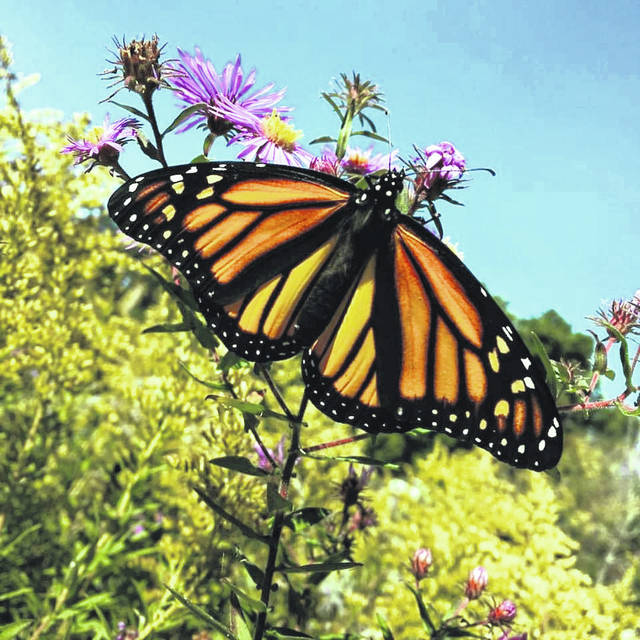 DARKE COUNTY — While busy families anticipate the beginning of the school calendar, trading in their flip-flops and sunscreen for pencils and backpacks, the lingering summer days have a few more surprises for nature lovers of all ages in Darke County. The monarch butterfly fall migration, which begins in mid-August and continues through early November, follows a flight path that often allows Ohio residents a “front row” seat to one of Mother Nature’s most stunning exhibitions.

Although at least three or four generations of the butterflies have made their spring journey north from the mountains in north-central Mexico, the monarch’s fall migration is a near miraculous feat, with individual butterflies living up to eight months as they make the perilous 3,000 mile journey back to the same overwintering resting grounds in the Oyamel fir forests near Michoacan, Mexico, which sit approximately two to three miles above sea level. Once on site, the monarchs cluster together and “rest,”until late February, at which time they migrate north for the Spring. In mid-March, while taking this northern trek, the monarchs go through at least three cycles of mating and laying eggs. Then, their month-long metamorphosis begins, from larvae to caterpillars, chrysalises and fully winged creatures, with wingspans reaching between three to five inches in length.

Monarch butterflies, during this Fall migration, can travel up to 22 miles per day during daylight hours, while resting in clusters at night for both protection and warmth. In the first week of September, usually through October, if one looks northward, he or she can see groups of monarchs flying southwest, sometimes up to 250 in a day. On bright, sunny days, heat producing thermals allow monarchs to “take it easy,” by allowing them to soar on the wind rather than flapping their wings, giving them much needed rest for their travels.

According to Darke County Parks naturalist, Mandy Martin, during peak migration hundreds can be seen in one day. “There are even several people who have been lucky enough to host an overnight roost of migrating monarchs. What I’ve observed is that most of those who witness large numbers in overnight roosts are adjacent to blooming clover fields. I’ve received several messages from Darke and Mercer county residents who have seen thousands of monarchs land in their fields and woodlands…It’s magical to experience.”

Some of the best locations to witness the Fall migration occur right here in Ohio, and specifically, in Darke County. Martin offers some tips on where to spot monarchs on the move, whether at home or away. “Anywhere you can get a great sky view, from your local park to your backyard. Lay on your back and face north and see how many monarchs you can see migrating.”

Martin added that because peak migration occurs from mid to late September, “If you’re up for a road trip, Lake Erie Metropark in Brownstown, Michigan, is an ideal location to see thousands in a day. The monarchs migrating from Canada bottleneck there to avoid migrating over Lake Erie. It’s a short three hour drive and is so worth it.”

One important note of interest in the fall migration is the conservation efforts being made to help the monarchs survive. Many factors can potentially threaten the longevity of the monarch as a species. Several factors threaten the wintering grounds in Mexico, including the felling of fir forests through logging, the use of herbicides and pesticides in avocado farming, and the unintended consequences of ecotourism. Although limited, the public can help by planting and cultivating the monarch’s chief source of food, — the milkweed plant, of which there are at least five species native to Darke County.

According to Martin, historically common milkweed was very prevalent. It grows easily in fields, roadsides, railroad beds and yards. There are several factors that led to the decline in milkweed including herbicide application on fields, increased mowing of roadsides, broadcast spraying along railroad edges and the desire for weed free lawns. As milkweed disappeared from the landscape so went the monarch butterfly. Milkweed is the only plant on which the female will lay her eggs. The larva (caterpillar) is dependent on milkweed for survival. Numerous organizations and wildlife agencies have vigorous campaigns to educate the public on the need to re-establish milkweed communities.

Because of these public conservation efforts, milkweed is once again dotting the roadsides along state routes, blooming in backyards and being planted in CRP lands across the Midwest. The Cincinnati Nature Center has created the Milkweed to Monarchs Initiative, to assist in reestablishing depleted habitat. In addition, Martin recommends other initiatives. “We participate in the MLMP, tag monarchs through MonarchWatch, and we contribute milkweed seed pods to OPHI.” She added, “We have established Monarch waystation certifications and have worked with several local schools in Journey North’s symbolic migration classroom project.”

For more information on the monarchs, contact Mandy Martin at the Darke County Parks by calling (937) 548-0165, or emailing [email protected] 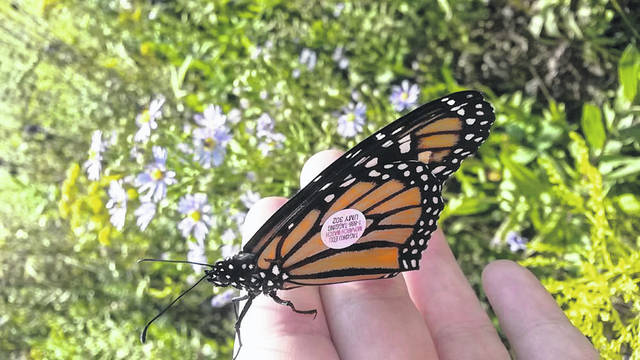