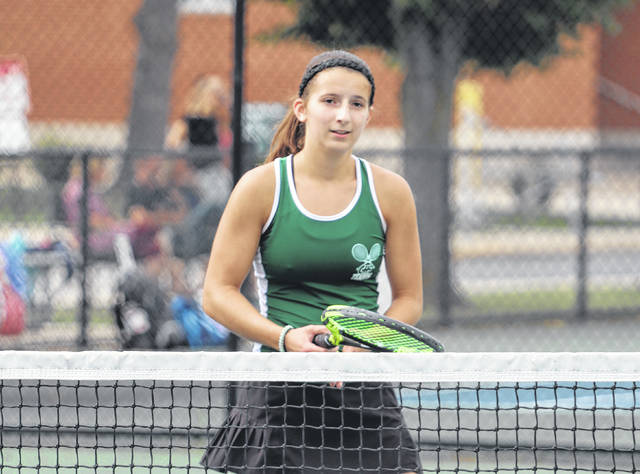 “Fairborn is a nice team,” said Greenville coach Jim Koontz. “It was close.”

Greenville was coming off a season opening 3-2 Monday night loss to the Troy Lady Trojans while the Fairborn girls were coming off a win over the Sidney Lady Yellow Jackets the night before.

Greenville senior, Emily Marchall, a 2019 First Team Miami Valley League (MVL) member defeated Eva Gibson 6-0, 60 at first singles to stay perfect on the season at 2-0. Faith Mansfield used a tie-breaker to get a win over the Lady Skyhawks Caitlin Bowling 6-4, 7-6 and 7-5 to go 1-1 on the season.

Greenville’s Felicity Lance down Fairborn’s Alyssa Carter 6-3, 6-1 moving Lance to 2-0 on the young season and give the Lady Wave a sweep at singles on the night. The Lady Wave’s Sadie Lance and Erin Stephens defeated Kenzie Taylor and Tayla Green 6-0, 6-0 at first doubles while Greenville’s Sarah Savoy and Cheyenne Hartsock lost a tie-breaker at second doubles, falling 6-3, 3-6 and 5-10.

“Second singles went to a tie-breaker and so did the second doubles,” Koontz stated. “We lost at second doubles – it could have gone either way.”

Coach Koontz was please with the Tuesday night play from the Lady Wave tennis team after a close Monday night home loss to Troy.