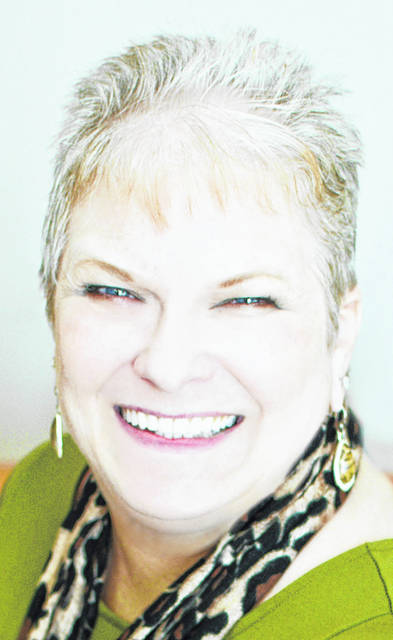 Are you ready for some Arcanum trivia? Arcanum Wayne Trail Historical Society invites you to take a walk along West George Street. After passing the Veterans Park you will come to the two storied brick building which for the past 16 years has been home to the Historical Society. You may wonder how old the horse hitching post is located next to the alley.

Here is the story. Many of us remember the tornado which touched down in 1992 in the southern section of Darke County causing damage to many structures on the south side of Arcanum. One of the buildings damaged was the home of the late James and Glenna Sluterbeck on East South Street. When it was determined the home would not be repaired, the house was dismantled by Bill Oler. Later Bill gave some of the salvaged material to Tom Jones. From one of the salvaged stone steps, Tom cut the hitching post. Tom then buried it in the ground for several months to give it an aged look. Although the hitching post in front of AWTHS never had a horse tied to it, the historic house is old enough to have had many horses secured nearby in the early years. The building was constructed as a Hotel and Saloon in 1894, with seven room upstairs rented to boarders.

Are you a car racing fan? Who would have thought they would ever run the Indianapolis 500 without any fans? I certainly never did, but wasn’t it just as enjoyable to watch on television the other weekend? To the car racing fans in our area, you’ll find this local trivia from the files of the Arcanum Wayne Trail Historical Society interesting. You can quiz your friends on this. Did you know that Arcanum’s Harry Stutz, who founded the Stutz Manufacturing Company in Dayton, entered a car in the first Indy 500 in 1911, and driver Gil Anderson finished a very respectable 11th, for an American car? The Stutz car also served as the Indianapolis 500 pace car in 1912. Stutz built the car in five weeks, which he named Bearcat. This bit of information was in the Dayton Daily News in May 2011. Although the DDN article said Stutz was from Arcanum, his Wikipedia website biography said he was born in 1876 near Ansonia on a farm to Henry K. Stutz and Elizabeth Schneider. After finishing his schooling, Stutz moved to Dayton. He was an automobile manufacture, entrepreneur, self-taught engineer, and innovator of the automobile industry. Whether Harry Stutz went to school in Arcanum or Ansonia, Darke County can be proud of what he accomplished.

More can be learned about early Arcanum in the books “Arcanum Chronicles” by William Gunder and Anita Short and “Arcanum, Ohio Business History (1852 thru 1968)” by Anita Short. Both books can be purchased at the historical society or on our website www.awths.org. The Arcanum Public Library has the books for you to browse through.

Arcanum and Pitsburg Community — There is a rally to Save Lives sponsored by the Arcanum and Franklin-Monroe schools with a blood drive. Together we can make a difference! The blood drive will take place on Thursday, September 10 from 12:30 p.m. to 6:30 p.m. at Gordon United Methodist Church, 311 East Main Street in Gordon. An appointment and a face mask is required, to sign up for a donor time go to: www.donortime.com. The blood drive will be coordinated with the Community Blood Center from Dayton. All donors are asked to use the Sponsor Code 235 when signing up. Any questions, please call 1-800-388-GIVE.

A Community Prayer Gathering and Walk will take place September 26 from 12 noon until 2 p.m. beginning at Veterans Park on West George Street. People of all faiths are invited to come together to pray for our families, our schools, and our nation. The Walk is in conjunction with the Prayer March organized by the Rev. Franklin Graham for September 26 in Washington, D.C. Those wishing not to walk may sit in the park to pray. Anyone using licensed golf carts, motorized scooters, and/or three-wheeled bikes are encouraged to join in this time of community prayer. Let us join together to lift our voices in prayer during these difficult times. COVID-19 guidelines will be followed during this event. Watch here for more details.