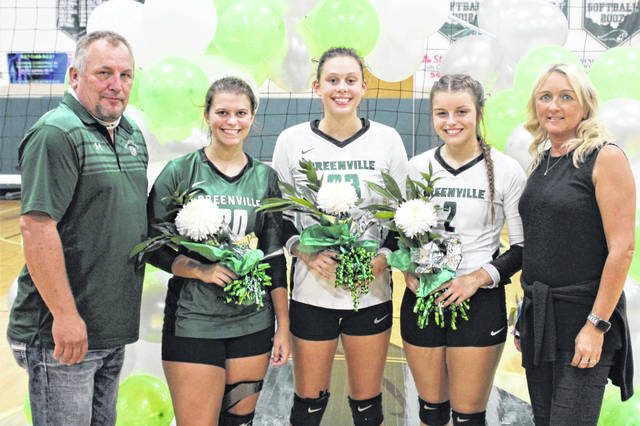 GREENVILLE – The Lady Wave shutout the visiting Stebbins Lady Indians on senior night with a 3-0 MVL win over the Dayton school.

“Our seniors did a good job leading the charge tonight,” said Greenville coach Michelle Hardesty. “I have to give it to Stebbins. They are working hard to be a better team and they have improved tremendously over the past years.”

“Allison powell is a defensive specialist,” Michelle Hardesty noted. “She has faced a lot of adversity on the volleyball court the last three years. Last season she didn’t get to play at all due to a hip injury and having some surgeries but she showned up every day last year. She is ready to play and has been a really great leader – just tremendous on her part coming back from a year down.”

“Carleigh Cox is a defensive specialist also,” said Hardesty. “She has a tremendous attitude, does whatever we have asked of her over the last three years and goes out there and tries her hardest. You can see that determination on her face and you can see when she is frustrated. She always tries to turn that around. The leadership with her has been really awesome and we appreciate everything she has done.”

“Abbie Yoder has come so far from when we started with her as a sophomore,” stated Coach Hardesty. “She has really learned to be coordinated at that middle position. You don’t see too many middle lefthanded players and she does a fabulous job at seeing the court. Abbie leads by example on and off the court. We are very proud of her and we look forward to seeing her going places beyond the high school career.”

“These three senior have worked so hard since we have been here and have set an example and work ethic for the youger girls behind them in the program,” said GHS assistant coach Jim Hardesty. “We are so proud of their attitude and determination. They will be missed.”

Greenville took an early 17-12 first set lead over Stebbins bringing a timeout from the Lady Indians bench. The visitors answered with 5-unanswered points to knot the score at 17-17. A Lady Wave timeout had the home team scoring 4-consecutive points to lead 21-17 on their way to a 25-21 first game win.

Set No. 2 had Greenville starting slow, trailing 3-8 before using a 8-1 run to lead 11-9 with Stebbins calling for a timeout. The Lady Wave took advantage of a 10-4 scoring run to lead 21-13 and go up 2-0 with a double digit 25-15 second set victory with Coach Hardesty giving younger players time on the court.

“We have to build their confidence as well as we go into the season,” Hardesty said of her substitutions. “We are trying to get them in and get them playing with these junior and senior girls that are seasoned and teach them the ways. Building confidence is a big part of our program.”

The Lady Wave continued to improve as the night went along with leads of 13-2, 20-8 on their way to a third set 25-11 win and sweep Stebbins 3-0 on senior night in Greenville.

“They got better as we went along tonight,” said Coach Michelle Hardesty. “Eveybody got some playing time. Our seniors did a good job leading the charge tonight.”