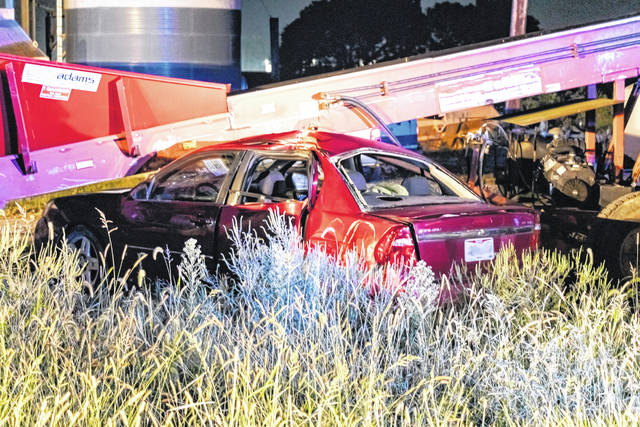 GETTYSBURG — A female passenger was injured Wednesday evening following a crash in which the driver lost control of the vehicle and struck a home and farm machinery.

At approximately 9:20 p.m., Gettysburg Fire and Rescue responded along with deputies from the Darke County Sheriff’s Office to the 7600 block of Beamsville Webster Road in reference to an injury accident.

According to the Darke County Sheriff’s Office, a preliminary investigation revealed a 2006 Maroon Chevrolet Malibu, driven by Joseph Martin, 26, of Union City Ind., was travelling westbound on Beamsville Webster Road. Martin failed to maintain control of his vehicle and traveled off the right side of the roadway, overcorrected, crossing over and off the left side of the roadway. Martin’s vehicle struck the front porch of a residence, located at 7689 Beamsville Webster Road, and continued west striking a utility pole resulting in downed power lines. Martin’s vehicle left the roadway once again striking a piece of farm machinery before coming to rest.

A female passenger in the vehicle, Erica Castleberry, 18, of Union City Ind., was treated on the scene by Gettysburg Rescue prior to being transported to Wayne HealthCare for non-life-threatening injuries. Martin was treated at the scene for minor injuries before refusing any further treatment and transport to a medical facility.

Martin was cited for reasonable control and driving under suspension.