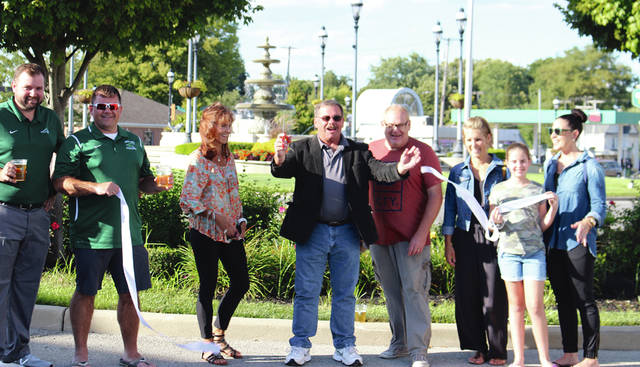 GREENVILLE — The ribbon cutting for the Grand Re-Opening of Downtown Greenville First Friday presented by Park National Bank — held at Rotary Park near the circle — was a lot more than just that.

It was also the first use of DORA (Designated Outdoor Refreshment Area) for downtown activities.

“The lighting, the cement, the conduits. It all looks beautiful.”

The ribbon cutting was held as thank you to the City of Greenville for the investment they made into the downtown area. Since the beginning of the year, they have taken up the old brick pavers that were uneven and a tripping hazard and replaced them with stamped concrete. They also installed up lighting around the trees and ran all cables underground. Although they still have some work to do next year on the side streets, they started the process of putting in the decorative lighting on each of the side streets from Walnut to Sycamore.

Also new to downtown Greenville is the Designated Outdoor Refreshment Area (DORA) that began on Friday and was a huge success.

Visitors to downtown Greenville can now go into one of the participating establishments that serve adult beverages and request a DORA cup. With the DORA cup and the DORA cup only, patrons can walk up and down Broadway without fear of an open container violation.

The DORA area stretches from the area around Garst Museum to the old Marsh Parking lot and from Walnut to Sycamore. The DORA runs from noon to 10 p.m. daily. Right now, establishments participating are The Don’s Pizza, Montage Café, The Merchant House and Danny’s Place.

The ribbon cutting was also a celebration of Greenville’s downtown businesses. This has been a very turbulent year and they were able to hang in there and have been very upbeat about the future of downtown Greenville.

“I want to thank the city administration, council members, and all of the employees,” Ryan Berry of Main Street Greenville said. “Without their support, none of this would have been possible. I believe they understand that the downtown community is the heart of Greenville and the importance of keeping it strong and viable. I also want to thank our downtown businesses for their support. We have a lot of great businesses and a lot of great business owners who want to make sure that our downtown is not just a good place to go, but a great place to go.”

And look for the excitement to continue in the upcoming months.