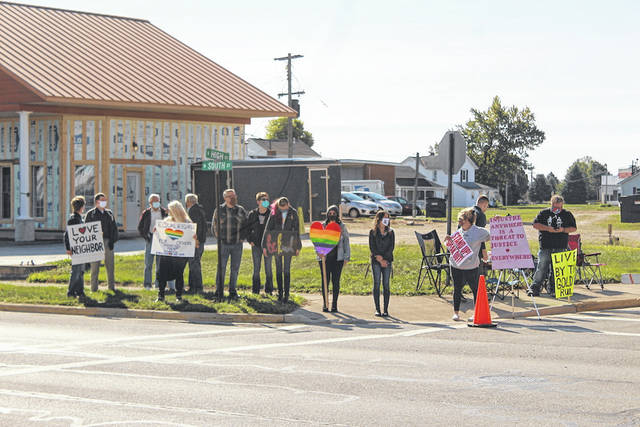 ARCANUM — An LGBTQ protest was held at the old city building in Arcanum, 104 W. South Street, on Saturday. The protest was organized by the Rainbow Alliance, an LGBTQ community based in Darke County.

The gathering took place in response to what protesters argued has been inaction by the town of Arcanum in dealing with a homophobic slur burned into the yard of a same-sex couple in Arcanum.

To provide some brief background, Bradley O’Dell and Mike Stone, residents of Arcanum, awoke on the morning of May 22 to find a homophobic slur burned in their front yard using some type of chemical. O’Dell and Stone have both contacted the local Arcanum government on numerous occasions and hold the position that the town is simply not doing enough to bring the perpetrator to justice.

“I believe this town as a whole is great, I grew up in this town and moved back because I thought it was great and wanted to be with my family,” said O’Dell. “After this has happened, I’ve been extremely disappointed in the leadership in Arcanum for their lack of response.”

Though the protest was meant to show support for O’Dell and Stone, they expressed their desire to turn the situation into something positive.

“This isn’t solely about us. It’s great that it has mine and Mike’s name on it, and we appreciate the support, but it’s about everyone,” O’Dell continued. “This is about the entire LGBTQ community and showing our support for this generation and generations to come.”

Abby Rose, founder of the Rainbow Alliance in Darke County, expressed her support for O’Dell and Stone and noted that the primary goal of the protest was to support them, but also to address discrimination.

“I just hope that Brad and Mike’s story helps people realize that discrimination is an issue that needs to be addressed and corrected locally,” said Rose. “The more awareness that we give to issues like this, the more momentum we gain to enact change and really address these issues.”

The village of Arcanum recently passed an anti-discrimination resolution with the aim of addressing issues such as this.

“The anti-discrimination resolution passed was unprecedented, I believe is important to the entire community,” said Arcanum Police Chief, Marcus Ballinger. “The legislation, in essence, was prompting Ohio legislators to readdress the Ohio Fairness Act which addresses anti-discrimination language.”

Ballinger concluded by stating that, aside from this incident, he has not experienced any discriminatory issues in the town and, as it goes without saying, that he believes that all people in the state of Ohio should be treated equally.

A small group of citizens were present at the protest and stated that they were simply there to keep the peace and watch over those entering the old city building as a part of the Ohio Open Doors history connection event that was taking place at the same time.