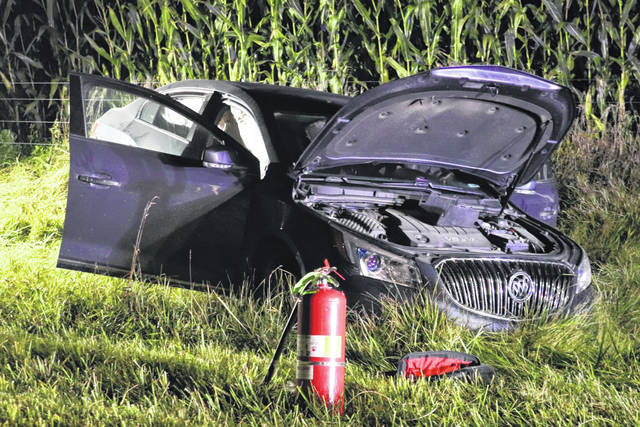 ANSONIA — A driver was transported for injuries during the overnight hours of Thursday following a single-vehicle injury crash that deputies credit to falling asleep at the wheel.

At approximately 12:19 a.m., emergency personnel from Ansonia Fire and Rescue responded along with deputies from the Darke County Sheriff’s Office near the intersection of U.S. Route 127 and York Road in reference to an injury accident.

According to deputies on the scene, a preliminary investigation into the incident revealed that a blue 2014 Buick Lacrosse, driven by Phaedra Brotherton, 48, of Bryant, Ind., was traveling south on U.S. Route 127, North of York Road. Brotherton failed to maintain control of her vehicle and traveled across the center line before exiting the roadway to the left. Her vehicle struck a raised area of the ditch causing it to go airborne. Brotherton’s vehicle came to rest shortly after this.

Brotherton, the sole occupant of the vehicle, was treated on the scene by Ansonia Rescue prior to being transported to Wayne HealthCare for what were described as non-life-threatening injuries. Further investigation revealed that the driver falling asleep at the wheel was a contributing circumstance to the crash.