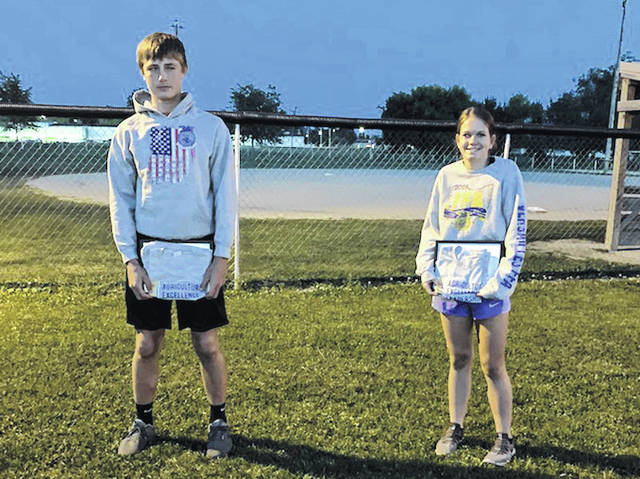 VERSAILLES — On September 21, Versailles FFA held its September FFA Meeting at the Versailles K of C Hall outside the shelter house and ball diamond. Versailles FFA members enjoyed an evening of playing softball, and having a cookout and meeting. At the meeting, Versailles FFA announced the September Members of the Month in which Caleb Kaiser and Zoe Billenstein were recognized.

Caleb Kaiser is a junior and the son of John and Kristi Kaiser. He is a fourth-year member and has participated in monthly meetings, Pheasants Forever youth hunt, Ag is Cool tent, OYLE barn clean outs, Farm Day, Greenhand FFA Conference, and State FFA Convention. Caleb’s SAE consists of sheep in which he shows at the Darke County Fair and Ohio State Fair and he works at Gehret Nursery. Caleb’s CDEs include Job Interview, Soils, Environmental/Natural Resources, and Wildlife where he placed fourth as an individual at state and was part of the first place team. Caleb received a T-shirt and certificate for being named member of the month. Congratulations Caleb Kaiser!

The second September FFA Member of the Month is freshman Zoe Billenstein. Zoe is the daughter of Jason and Kelly Billenstein. She is a second-year member and has participated in monthly meetings, omelet breakfast, Blanket the World, nursing home visits, OYLE barn clean outs, and shop and crop. Zoe’s SAE consists of raising broilers and layer chickens. Zoe also serves as the assistant sentinel. Zoe’s career development event participation includes: parliamentary procedure and Creed Speaking where she placed fifth at state in her group. Zoe received a T-shirt and certificate for being named member of the month. Congratulations Zoe Billenstein!