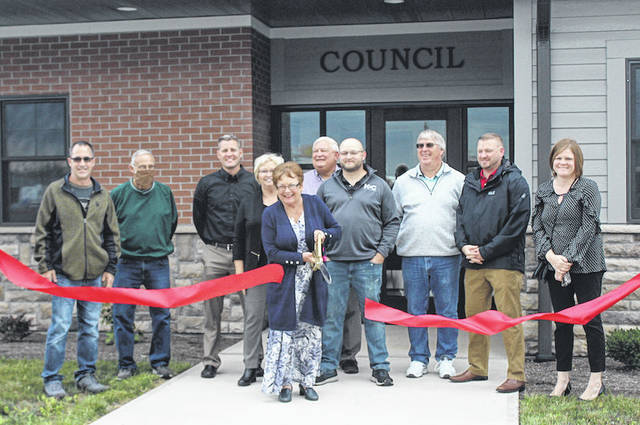 Prior to the council meeting, community members gathered in front of the new city building and police station, located at 309 S. Albright Street, for a ribbon-cutting ceremony. The village government moved into the building on March 19 and 20, but due to COVID-19 precautions at the time, were unable to host a ceremony.

Arcanum Mayor Bonnie Millard began the ceremony with a short speech in which she thanked members of the community, the architects and builders, and the State of Ohio for their assistance in planning and completing the building. Also present at the ceremony was State Representative Jena Powell (R), who gave a short speech and presented the town with document from the Ohio Legislature commemorating the event. Following the ceremony, Millard expressed her thanks to the town of Arcanum.

“I thought the turnout was wonderful,” said Millard. “I was totally taken back by the number of people that were here to see the building. It’s great to see community members come out and show support for the town.”

After the ceremony and tours concluded, the village council began their meeting by discussing plans for new housing located behind the building formerly known as Sutton’s. The project will be carried out in three separate construction phases, and the village is hopeful that the project will begin sometime in early 2021. Prior to the next council meeting on October 13, there will be an open forum at 6:30 p.m. in which village residents are invited to come and voice their opinions on the project.

The service and leisure committee discussed plans for reopening the town’s swimming pool for the summer of 2021. For the most part, the pool itself is ready for use, but the village has shifted its concern to the pool facilities. As of now, the plan is to entirely replace all the plumbing in the locker rooms, and install touch-free sinks and toilets. This will, primarily, help to combat the spread of germs, but the council also agrees it is a much needed update for the facility. The committee also discussed installing a new playground at the city ball diamonds.

Rick Genovise, chair of the Village Safety Committee, presented information about the village’s police department, and questioned the council as to whether or not everyone supports having a 24/7 police department in the town. All council members agreed that a 24/7 policing service is in the town’s best interest, and passed a motion to hire a new full time police officer and permanent part time officer at the beginning of 2021. These hirings already fit into the 2021 town budget, so there will be no need for the town to expand its finances to cover this. An in-house police training program was also discussed with the hiring of new officers. Genovise and the town council expressed their continued commitment to village’s police force.

“It is my firm belief that the village must continue to rebuild its police department,” said Genovise. “I have always felt that village citizens deserve more full time officers that we can come to know and trust, rather than a department that consists of mostly part time officers.”

The meeting concluded with council passing ordinances focused on transferring real estate for the development project, and highlighting town expenditures in the future.