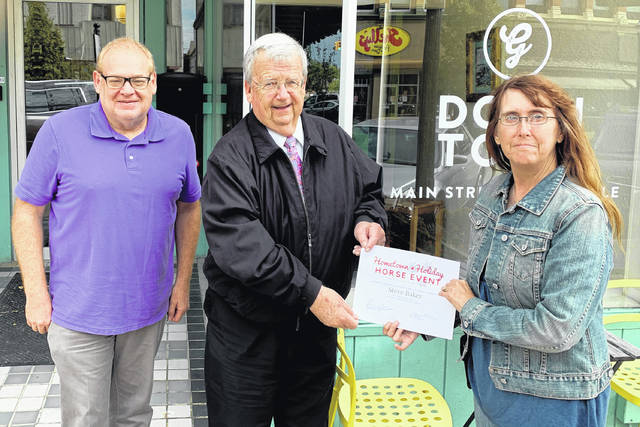 GREENVILLE – While not a resident of Darke County, Steve Baker has been here and covered nearly every story imaginable for the past 40 years.

Because of his dedication to covering Greenville and Darke County, Main Street Greenville and the Hometown Holiday Horse Event Committee has named Baker as the Grand Marshal for this year’s event.

The event will be held Saturday, Nov. 21 with the lighted horse caravan beginning at 7 p.m. along South Broadway in downtown Greenville.

Baker started his career in broadcasting after a stint in the Navy. In 1970, he returned home and began working in radio at WPTW in Piqua.

His father owned the station and Baker recalled his dad telling him he was going to give him a six-month trial and if it didn’t work out, he would be out. Fifty years later, Baker is still broadcasting.

Prior to joining WHIO-TV in 1980, the legendary broadcaster got a taste of the television side of broadcasting while working as a stringer for Channel 2.

Reminiscing about his time covering events in the county, Baker remembered trials, crashes, and fires, but he also was fond of covering happier events that take place throughout the county. Diana Stebbins, chairperson for the Hometown Holiday Horse Event, shared when the horse event first began, they were fortunate if it had 1,000 to 2,000 spectators.

After Baker came in and did a story on the event, it grew to around 10,000 visitors. One may not hear or see Baker on their television as much as they once did, but he said he still there and he is still enjoying it. Today he is semi-retired, but is still working on finding stories.

Finding those stories may not be as hard as it was in his early days of television. Baker has built up a huge following and a lot of fans. When out on assignment, dining at a local restaurant, or walking down the street, it is not uncommon for someone to give him a wave or from a distance shout, “Hi Steve.”

He shared that it is the people he’s met along the way that have made his job enjoyable and he is always ready to answer their questions or chat for a few minutes.

After 50 years in broadcasting, he has plenty of stories he can share. Come see Baker Saturday, Nov. 21 as horses from around the region caravan through downtown Greenville. Because last year’s event was canceled on the day of the event, the 2019 Hometown Holiday Horse Event Grand Marshal Betty Birt will be joining Baker in this year’s main event.

Main Street Greenville is a non-profit organization committed to stimulating and supporting revitalization efforts, historic preservation and economic growth in Historic Downtown Greenville. To learn more about the organization, visit or call 937-548-4998. You can also like the organization on Facebook to receive updates on a regular basis at www.facebook.com/mainstreetgreenville