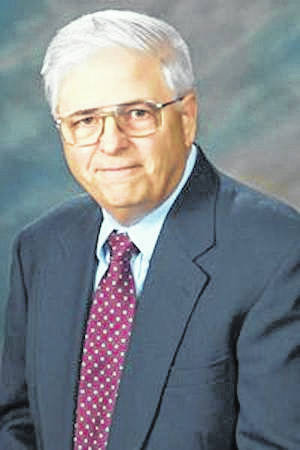 DARKE COUNTY — The challenger in Ohio’s 80th House District election, Democrat Ted Jones, took time to speak with The Daily Advocate about the upcoming election cycle. Jones is running against one-term incumbent Jena Powell (R) for her seat in the Ohio House of Representatives.

Jones is a retired factory manager and township planner who currently resides in Miami County with his wife of 54 years. He received his B.A. from Defiance College and also received a degree from the Penn State Industrial Management Program. He is also a veteran who served for six years in the U.S. Coast Guard from 1965 until his honorable discharge in 1971. During his time in the service, Jones was awarded the Good Conduct Service Medal, Vietnam Era Service Medal, Arctic Service Medal and the United States Coast Guard Sea Service Ribbon.

Jones previously ran for the U.S. House in Ohio’s 8th congressional district and confirmed that he is seeking election to the state legislature to ensure the health and financial well-being of those residing in his district. His campaign is currently focused on a number of different topics, but primarily, he would like to see the education system in Ohio change.

“There are several reasons why I want to represent our district in the state legislature,” Jones noted. “My initial interest was focused on how our schools are being managed… and how public funding for education was being addressed. I was also concerned how public education was being undercut by the EdChoice Program which allows children to transfer to a ‘for-profit school’ otherwise known as a ‘private or community school.’ When a child transfers to a ‘for-profit school,’ the child takes the funding that was allotted to the public school system which reduces the funding that the public schools have in their budget. Costs range from $6,000 to $8,000 per child. Essentially, the public pays for a child’s private education. The direct result of that is that our school and property taxes keep increasing to make up for the shortfall in funding.”

Jones spoke extensively about education and the changes he would like to see in the public school system in Ohio. He believes that the Ohio Department of Education has grown too big, and has become far too arbitrary in its operations. He stated that he wishes to see public schools regain their local control, as he believes that local school boards, administrators, and teachers know what is best.

Another primary reason Jones is seeking election is to end the corruption in the state legislature. With Ohio Speaker of the House Larry Householder, facing a $1 million defamation lawsuit, Jones believes the corruption in Columbus has been running rampant, and not enough state representatives have condemned Householder or other forms of corruption.

“Our state legislature has become a sideshow of corruption, a national embarrassment, and I’m concerned about the frequency of that corruption in state government.” Jones said. “I believe that a State Representative or State Senator should be suspended from government if indicted, and expelled from serving in the House or Senate if found guilty of a felony crime. Former House Speaker Larry Householder was indicted for bribery and money laundering to ensure passage of HB6. HB6 was a $60 million bailout package for the operators of Energy Harbor, previously known as First Energy. The cost of the bailout will be passed on to every electrical utility customer in Ohio to pay a portion of the $150 million a year until the year 2026. The people that reside in our District deserve nothing less than honest leadership.”

When asked what he wished to achieve legislatively, Jones outlined a number of things he hopes to see happen that he argues will result in the better financial positioning of all Ohioans moving forward.

“I would move to restore the $210 million in funding cuts to Medicaid made by Gov. DeWine to support those in need of medical treatment for drug and alcohol abuse, and treatment for COVID-19 infections.” Jones said. “I would review or move to restore $300 million in K-12 school funding cuts and put a moratorium on the School Voucher Program as currently written. I also want to reduce taxes on working families, and I’m prepared to work on legislation that will accomplish that. Ohio’s agriculture is important to Ohio’s economy. I want to make sure that Ohio’s farmers in the 80th District and around the state are not forgotten when it comes to taking advantage of tax incentives to reduce the cost to farm operations. I fully support and I intend to improve the current CAUV (Current Agriculture Use Value) program if supported.”

Among many other things, Jones also highlighted his desire, as previously mentioned, to overhaul the Ohio Department of Education. He is also in support of restarting the Ohio Incumbent Workforce Training Program, and seek state subsidized funds for of age vocational and technical students to work in business that would further their experience and possibly open up new opportunities to work or earn more money to further their educational desires.

When asked about running as a Democrat in a predominantly Republican district, Jones noted that he considers himself a moderate Democrat and someone who is willing to cross party lines to enact meaningful change.

“There are, and will be, differences in political thinking for sure, but we should not let that difference keep us from being united as a society. In the end it only makes us weaker in the eyes of our enemies.” Jones declared. “What makes the U.S. a great nation is our economic and military strength, but it’s also the generosity of our people. Years ago I would have been considered a conservative Democrat, I believe in common sense solutions to complex problems. When we focus on political parties, we all lose. When we focus on solving problems, everyone wins, and that’s the key. What makes sense for the majority of people that live and work in our district, and our state, should be first and foremost the goal.”

Jones also took time to outline his thoughts on how COVID-19 has been handled in Ohio.

“I believe that education and the dissemination of accurate information are the keys to understanding how and why the COVID-19 virus spreads, and how we can minimize our exposure to defeat the virus.” Jones said. “The Ohio Department of Health needs to increase its efforts to inform the public on the need to take preventative action to ensure the public health and I want to be a part of that effort. I support the DeWine administration’s efforts to help small businesses that are in need of assistance in navigating state and federal regulations to help maintain our economic base. Obviously guidelines need to be modified for small businesses to ensure they receive the funding that the government has set aside.”

To conclude the interview, Jones was prompted to speak directly to his constituents.

“I served my country unconditionally and without bias. I served my country because I considered it my patriotic duty to do it, and I did it with honor. Most of all, I want to work for the people of our District as I did for my own family, to make a difference in our district.” Jones concluded. “I want to make our district a better place to live and grow our families, as well as create economic opportunity so we have access to good paying jobs, and educational possibilities that will advance our children’s potential for success. If elected, I want to represent you and our district to help ensure that happens.”