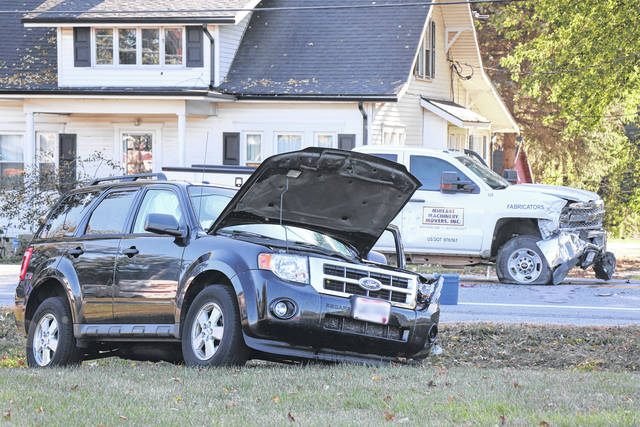 GREENVILLE — A two-vehicle crash Tuesday on the outskirts of Greenville resulted in one driver being transported to the hospital for injuries.

At approximately 4:02 p.m., emergency personnel from Greenville Township Fire and Rescue responded along with deputies from the Darke County Sheriff’s Office to an injury crash at the intersection of State Route 571 and Arnold Road.

According to the Darke County Sheriff’s Office, preliminary investigation revealed a black 2010 Ford Escape, driven by Kyle Collins, 21, of Greenville, was stopped at the stop sign at Arnold Road and State Route 571. Collins failed to notice and pulled into the pathway of oncoming traffic while attempting to make a left turn onto State Route 571. The Collins’ vehicle was struck nearly head-on by a white 2019 Chevy 2500 truck, driven by John Beaty, 51, of Redkey, Ind., resulting in the Ford coming to rest off the right side of the roadway in a field.

Collins was treated on the scene by Greenville Township Rescue prior to being transported to Wayne HealthCare for what were described as non life-threatening injuries. Beaty was examined on the scene by EMS before refusing any further treatment and transport to a medical facility. Collins was issued a citation for failure to yield from a stop sign.