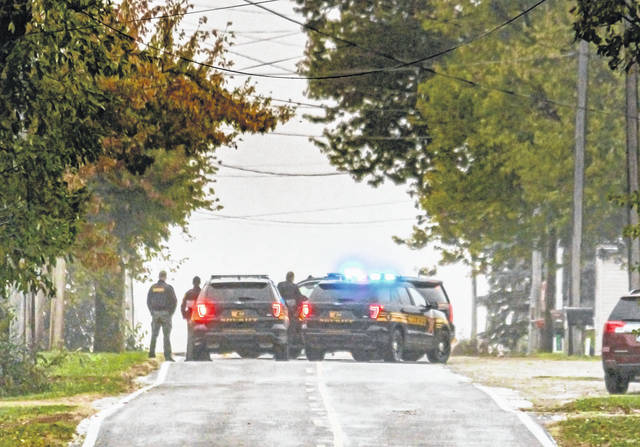 At approximately 5:03 p.m., deputies from the Darke County Sheriff’s Office responded along with Tri-Village Rescue and Hollansburg Fire to the 3100 block of Hollansburg Tampico Road in reference to a domestic disturbance in progress.

According to Chief Deputy Mark Whittaker of the Darke County Sheriff’s Office, prior to the arrival of deputies to the scene, the suspect, identified as a 39-year-old male subject, barricaded himself in his residence, refusing to come out. Initial reports indicated that the suspect then began threatening “suicide by cop” if deputies entered into the residence. Darke County deputies, in an attempt to ensure public safety, then blocked off all roadways and streets leading to the residence and the surrounding area and attempted to establish communication with the suspect.

“What started as a domestic disturbance involving firearms became far worse when the subject decided to barricade himself in his home,” stated Whittaker. “We were able to communicate with him throughout the evening but due to possible mental health issues, we were unable to talk him out.”

Along with the large law enforcement presence, residents of the surrounding neighborhoods could hear orders being given by deputies over a PA system asking the subject to either answer his phone or to exit out the front door with his hands up. After several hours of failed negotiations, deputies executed a forced entry into the residence and, following a brief scuffle, took the subject into custody.

“Because of the likelihood of mental health issues, the suspect was transported from the scene by Tri-Village Rescue and taken to Wayne HealthCare for further evaluation,” added Whittaker. “At this time there are no criminal charges. The key importance here is that he receives the help that is needed.”

No injuries were reported as a result of either the domestic disturbance or the standoff. Although no charges have been filed at this time, the incident does remain under investigation by the Darke County Sheriff’s Office and charges may be pending.