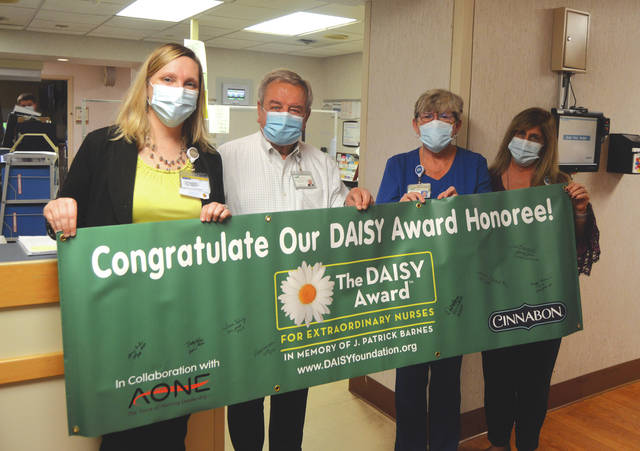 GREENVILLE — Wayne HealthCare RN and Charge Nurse Deb Osborne became the well deserving recipient of the DAISY (Disease Attacking the Immune System) Award Wednesday at Wayne HealthCare and was surprised by the honor.

“I am very surprised,” she said. “I really don’t know what to say.”

The award is given out semi-annually and was established in 1999 by the Patrick Hughes family.

After Hughes’ death, they wanted to honor him and kept coming back to the same thing during his eight week illness — the extraordinary care his clinical nurses provided.

So, the award was created for extraordinary nurses and it would be hard to find someone who better fits that description than Osborne, who will have been at Wayne HealthCare 30 years next June.

Another DAISY winner Rose Hall nominated her and it is easy to understand why.

“Deb (Osborne) not only excels as a nurse, but as a human being outside of work,” Hall said on her nomination form. “She is a true patient and co-worker advocate, constantly trying to remedy issues brought to her. She picks up many hours beyond her scheduled shifts to help the patients receive the specialized, rural care that is characteristic of Wayne HealthCare.

“Deb portrays a true representation of positivity and professionalism, even when she does not agree with the issue or situation,” she added.

Osborne has saved countless lives in her role as nurse at Wayne HealthCare and also saved lives off the nursing floor.

While Osborne is a modest person who doesn’t like to brag about herself, some of the most notable times she has saves lives include the following:

She saved a co-worker by giving them the Heimlich maneuver.

“That wasn’t just me, there was another person there,” Osborne said.

On another occasion, she performed CPR in the pouring rain one night when a young father had been hit by a car on the side of the highway.

In yet another incident, Osborne was driving on the highway and came to a stop in traffic and noticed that there was a horrible car accident involving victims thrown from the car, so she stopped and checked their pulses.

At the time, she noticed a car on fire with an elderly couple trapped inside.

Osborne yelled for the policeman to give her his flashlight and she busted out the window of the car, while another bystander extinguished the fire.

Then, Osborne assisted in extraction the couple and from the car and held a C-spine until the paramedics showed up.

“That couple is doing fine and lives in Richmond now,” Osborne said. “So, that is a good thing. I don’t know why I keep getting put in these positions, but I know it is all part of God’s plan.”

Kim Freeman, VP of Patient Care Services and Chief Nursing Officer, did the presentation of the award in front of the third-floor nurses station.

Along with a certificate, she received a DAISY Award Pin and The Healer’s Touch Sculpture.

“Absolutely,” Freeman said about presenting the award being one of the best parts of her job. “Deb (Osborne) is very deserving. She is someone who has made a significant impact to the community.”

As well as being a guardian angel for many and a mentor for countless — which is what the DAISY Award is all about. 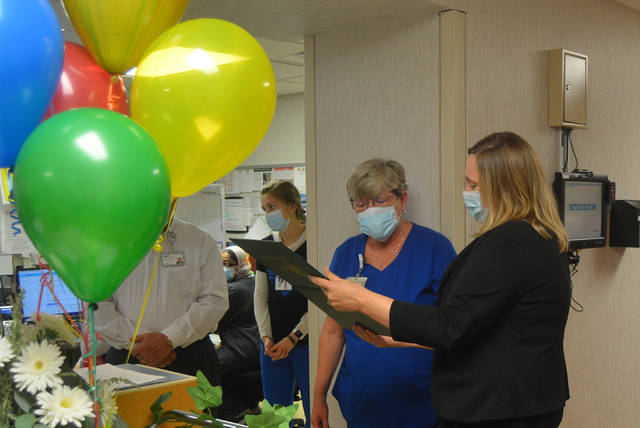 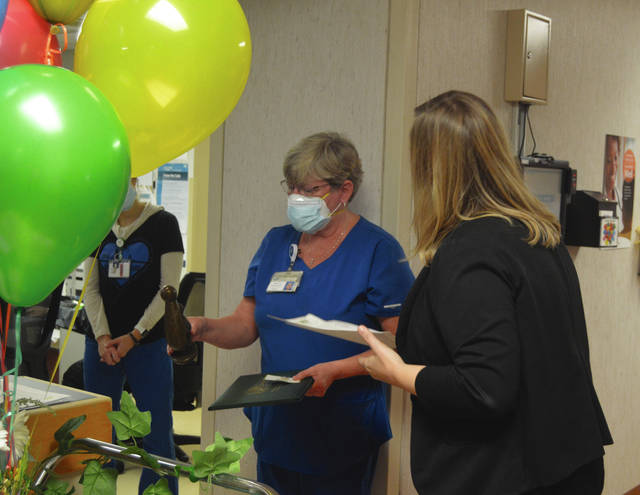