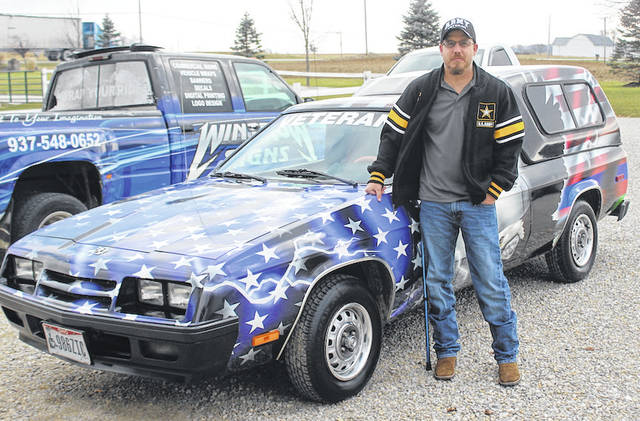 GREENVILLE — The sacrifices of U.S. service veterans, no matter how large or small, represent a selflessness that we should all aspire to.

Ryan Borem, a U.S. Army veteran, Chicago native, and recently-moved resident of Darke County, exemplifies the sacrifices that so many veterans have made. Borem, 44, joined the military directly after graduating from high-school, and never looked back. He spent 18 years serving our country, with his overseas tours taking him to Iraq and Cuba. During his service, he suffered a broken back which led to life-threatening blood clots that he must seek medical attention for on a regular basis. He has suffered numerous heart attacks from the blood clots, and must go to the doctor every month for surgery to break up the blood clots throughout his body. Borem admitted that his doctors and heart medication are what is keeping him alive.

Though Ryan’s sacrifice has been greater than most, he still maintains a positive attitude and active social life. It’s in this spirit that so many who have come in contact with Ryan quickly learn the impact of a positive outlook. Joe Wintrow, owner of Wintrow Signs on US 127, is one of the people who have been inspired by Ryan’s courageous service and positive outlook, so much so that Wintrow had to show his gratitude.

Wintrow, in conjunction with Reflections Auto Body and CNR Detailing of Greenville, donated a custom detailed vehicle to Borem on Friday. Wintrow confirmed that he knew that he wanted to give back to Borem as soon as he heard his story.

“Ryan came out to the shop and asked about a vehicle wrap,” said Wintrow. “When I was measuring the vehicle down, he began telling me his story and it stopped me dead in my tracks, I knew I wanted to give back to him right away. It’s nice to be able to give back, but this is all about Ryan and his service and courage.”

Borem was incredibly moved by the donation, and even admitted he had trouble sleeping the night before.

“I felt like a kid on Christmas eve,” Borem joked. “I’m a huge Mopar fan, I love Dodge. I saw the car coming back from church about two or three years ago and had to buy it. And I went to Reflections Auto Body to see about having it detailed and things moved on from there. I have God in my life, and I try to help people so much in every aspect of my life, so for this to happen is just amazing. I’m speechless, but the vehicle speaks for itself.”

When asked about his journey, Borem offered up some of his wisdom as to how he keeps a positive outlook.

“Don’t give up on life until the miracle happens, because you never know when it’s going to happen.” Borem concluded. “I don’t feel worthy to have that car, and for something like this to happen is just unreal.”

Wintrow and all in company made sure that the day was about Borem, and offered their most sincere thanks for his courage, and his service. The Daily Advocate congratulates Ryan Borem on his newly detailed vehicle, and recognizes him for his exemplary military service, and gives its admiration to Joe Wintrow and Reflections Auto Body and CNR Detailing.