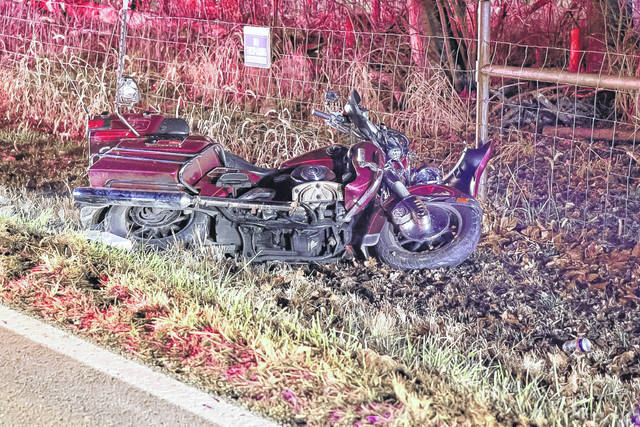 ARCANUM — A motorcyclist was hospitalized Monday evening after being found lying in the center of the roadway following a crash with a deer.

At approximately 5:49 p.m., emergency personnel from Arcanum Fire and Rescue responded along with Darke County deputies to 3700 block of Arcanum Bears Mill Road in reference to a motorcycle vs. deer injury crash.

According to the Darke County Sheriff’s Office, a preliminary investigation revealed a red 2003 Harley Davidson was traveling southbound on Arcanum Bears Mill Road when the male driver of the motorcycle struck a deer. The collision resulted in the driver being thrown from his motorcycle as it continued traveling off the right side of the roadway, eventually coming to rest in a ditch.

The unidentified male driver of the motorcycle was treated on the scene, for what were described as non-life-threatening injuries, prior to being transported to Wayne HealthCare for further treatment and evaluation. His condition remains unknown at this time.