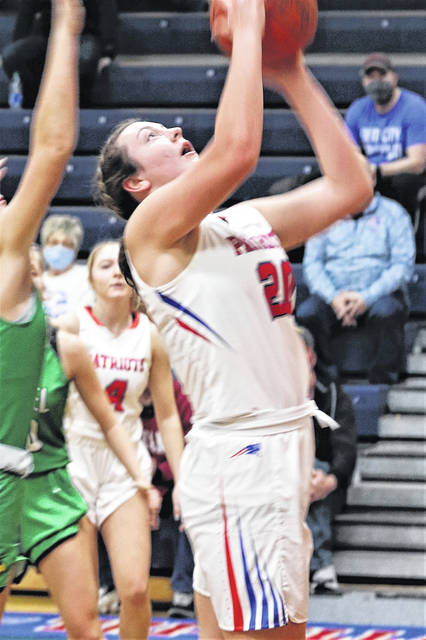 NEW MADISON – The Tri-Village Lady Patriots hung on for a 54-47 win over the visiting Bethel Lady Bees in CCC action.

Tri-Village took the opening period 16-10 with a strong inside game led by 7 Morgan Hunt points, 5 Meghan Downing points and a 2 point basket each from Rylee Sagester and Torie Richards.

The second quarter had the Lady Patriots taking a double digit 33-21 lead at the halftime break with Hunt and Downing each adding three second quarter baskets, Delanee Gray hitting the team’s lone first half 3-pointer and Sagester adding a bucket.

Period No. 3 saw the Lady Bees take the period 17-11 on the back of the team’s fourth, fifth and sixth 3-pointers of the night sending the game to the final quarter with Tri-Village holding a 44-38 advantage.

“Defensively we kind of lost our way in the second half,” stated Gray. “We weren’t following our assignments the way we were supposed to and then what happened is they gained confidence. They started getting a little bit closer and it forced our kids to kind of go into a panic mode so now because you’re not playing well on the defensive end, you’re compounding that by making mistakes offensively.”

The Lady Patriots continued to struggle beyond the arc in the fourth as the visitors would use a 10-3 run to open fourth quarter play and trail 48-47 with 3:00 showing on the board.

“We’re out there launching when in the first half our two bigs dominated the paint,” continued Gray. “The third quarter we go away from it – we are launching from the perimeter when we’re not hitting them – some bad basketball.”

Molley Scantland burried a Tri-Village 3-pointer giving the home team some late game breathing room in leading the team on a 6-0 run to close out scoring and keep the Lady Patriots undefeated in CCC play.

“A huge shot at the end of the game for us,” said Gray. “We needed somebody to step up and make that play because we were struggling mightily and Molly came up and made definitely one of the biggest plays of the game.”

“Molly has never been shy about taking a shot,” Gray added. “She trusts her ability to make shots. She is a good shooter and we were confident with her for taking that. It was good to see it go through for her and obviously for us.”

Morgan Hunt led the Tri-Village and all scorers with a game high 20 points while Meghan Downing was adding 17 points for the Lady Patriots. Hunt and Downing each recorded 12 rebounds in the win.

“We have to play through them more,” Coach Gray said of his two big inside players; Hunt and Downing. “It makes everybody’s job easier when we can get touches in the paint. Teams aren’t going to allow us to have one-on-one matchups if we keep getting the ball inside. They’re going to start bringing double teams which is going to make our kick-out open for jump shots and those shots you make at a much higher percentage than when you’re not getting touches inside.”

With the win, the Lady Patriots move to 5-0 in CCC play and improve to 7-2 overall on the season. 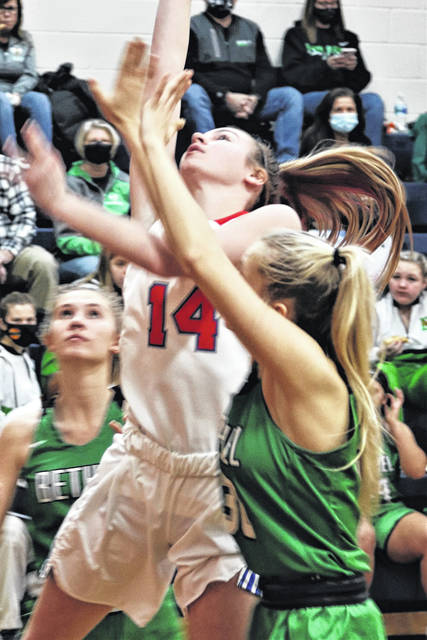