GREENVILLE — Mrs. Sherry Flora has taught for Greenville Elementary for almost three decades. During this time, she has educated many elementary students in the area of science. Mrs. Flora is a scientist at heart — from the time of seventh grade when she burned a peanut in a can to determine the amount of calories it possessed. As she entered college, Mrs. Flora focused on sharing her love for science with others and decided to pursue a degree in education.

Her thirst for knowledge regarding archaeological digs started in the mid 1990s in Ansonia. Mrs. Flora recalled that a mastodon’s tooth was caught in a farmer’s plow. Soon the field became a digging site in conjunction with an Ohio university and about a dozen teachers. The bones were not well preserved as they were located in the surface of the topsoil. Therefore, the fragments were plastered prior to being removed from the dirt with brushes and shovels. Mrs. Flora explained that it was a “semi-scientific” dig as the findings were not measured in depth or mapped. She recalled finding teeth and ribs, and to this day, she still has rough chunks of mastodon bone.

In the summer of 2014, Mrs. Flora traveled to La Crosse, Wisc., as part of the National Endowment for Arts grant to participate in another dig. Upon arrival, the land had been cleared of the grass for the participants. A team of thirty people worked in small groups to remove two layers of soil. They utilized shovels, brushes, large sifters, and other small tools to remove arrowheads, pottery, and other early remnants of the Mound Builders. The area was measured and mapped to include the depth of where the fossils were found. The samples were then bagged and labeled prior to being sent to a laboratory for further research.

Beginning in 2016, Mrs. Flora integrated her passion for archaeological digs and literature into the classroom. She began by having students read the book, “Mary Anning and The Sea Dragon” so they could gain background knowledge of the role of a paleontologist. Students then learned about how scientific digs were performed through videos, textbooks, and lectures. Later, students received a fictitious letter from a university professor, “Dr. Brown,” who needed their assistance on a fossil dig as all other paleontologists were out of the country. Student teams were formed and given the task of deciding how they would present the findings to “Dr. Brown.” The planning sheets included measuring and mapping the location of the fossils as well as organizing the fossils. The teams then chose the utensils (toothpicks, tooth brushes, paint brushes, and sifters) to uncover the fossils in layers of soil and sand contained in square tubs.

After making notes and taking pictures of the fossils on their iPads, materials were referenced regarding their findings. Since the fossils were all classified as underwater fossils, the correct conclusion drawn in the final report from the teams was that this portion of Ohio was previously an ocean or large river. Students were excited to get to keep some of the fossils and had so much fun that this activity has become an annual event for fourth graders. Mrs. Flora also has aspirations to engage in another archaeological dig soon — all for the love of science. 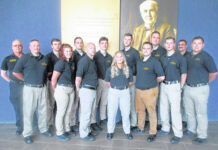