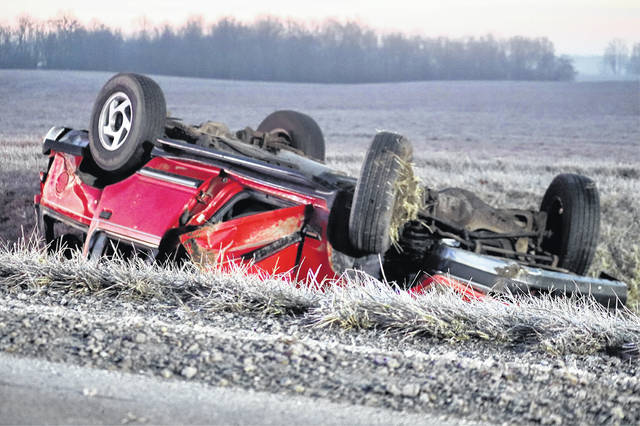 PALESTINE — A seven-month-old infant was among those injured Sunday morning in a rollover crash that resulted in the transport of three people to Wayne HealthCare.

According to the Darke County Sheriff’s Office, a red 1993 Ford Explorer, driven by Victoria Greer, 25, of Lorain, Ohio, was traveling eastbound on U.S. Route 36 east of Palestine. Ms. Greer is said to have fallen asleep, causing her vehicle to travel off the right side of the roadway striking the side ditch resulting in the vehicle to go airborne and then roll at least once before coming to rest on its top.

Greer, as well as a front-seat passenger, Kenneth Wilcox II, 31, of Lorain, and a 7-month-old daughter, were all extricated from the vehicle by non-mechanical means prior to being treated and transported to Wayne HealthCare for what were described as non-life-threatening injuries. LifeFlight had been requested to the scene to aid in the treatment and transport of at least one patient, but was unable to fly due to inclement weather conditions.