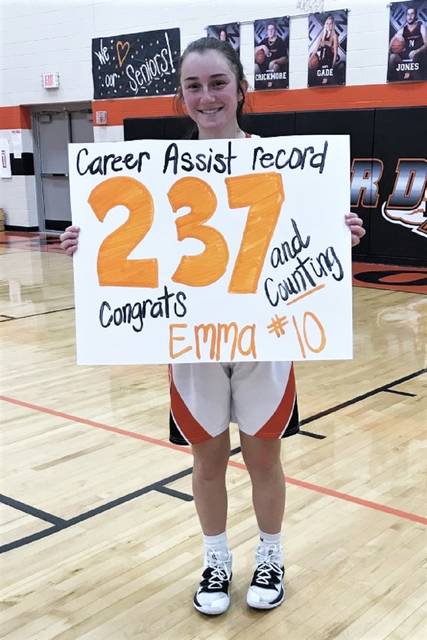 “We came out hitting shots early, playing well,” said Bradford coach Chris Besecker. “We executed at the offensive end – the kids were seeing the floor and finding each other. We had a lot of good passes, the kids were getting open and moving without the ball. Obviously Austy (Miller) was shooting lights out and that was nice to see.”

Austy had 10 points the first quarter, hit a three to start the second quarter and that gave her 1,000 and then Emma got the assist record early in the fourth quarter,” Coach Besecker noted.

Five Lady Roaders scored in the opening period led by 10 Miller points to lead 20-7 after one quarter of play.

Miller drained an early second quarter 3-pointer to earn her 1,000th career point on her way to scoring 14 second period points leading the Lady Roaders to a 41-21 halftime advantage.

Defense by both teams had Bradford taking Period No. 3 by a 12-7 score with Miller hitting three 2 point baskets for 6 points sending the teams to the final period with the Lady Railroaders in control with a 53-28 lead.

The fourth quarter went to Bradford with Canan getting her record setting assist and Miller hitting her fourth trey of the night and going 2-2 at the charity stripe.

The duo of Miller and Canan benefited from each other’s on-court play with Many of Canan’s assists, a four year starter coming by way of Miller baskets and many Miller points the result of Canan assists.

“It couldn’t have worked out any better,” Coach Besecker said. “It was neat to see that happen on the same night.”

Miller led Bradford and all scorers with a game high 35 points while running her total to 1,022 points. 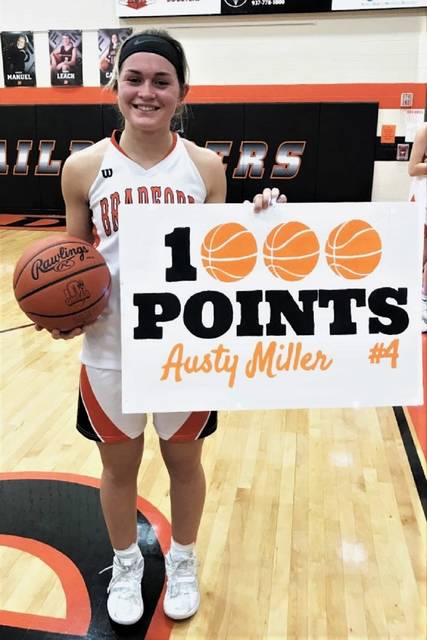