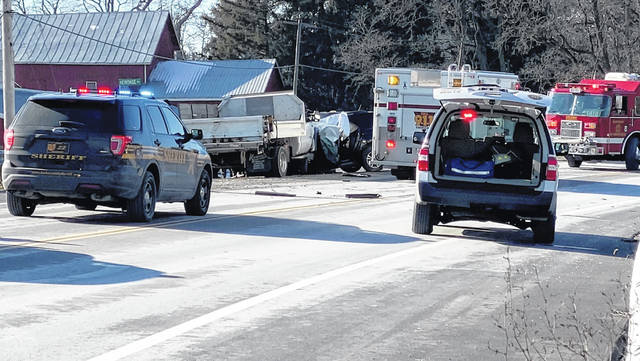 GREENVILLE — A head-on collision Wednesday afternoon claimed the lives of two people and sent two others to hospitals for their injuries.

At approximately 1:25 p.m., emergency personnel from Greenville Township Fire and Rescue, City Of Greenville Fire Department, and Arcanum Rescue responded along with Darke County deputies and Greenville Police officers to State Route 49 south and Heritage Road in reference to a two-vehicle, head-on collision with serious injuries.

Preliminary investigation revealed a white 2003 Ford F-550 driven by Adam Godwin, 21, of Greenville, was traveling northbound on State Route 49 near Heritage Drive. Godwin’s vehicle traveled left of the center line striking a southbound black 2013 Chevy Equinox driven by Karley Borger, 27, of Arcanum. Godwin and Borger’s vehicles collided head on, coming to rest against a guard rail in the southbound lane of traffic.

Godwin, the lone occupant in his vehicle, was transported to Wayne Healthcare for evaluation and was later released. Borger and her front seat passenger, Ashley Fish, 27, of Arcanum, succumbed to their injuries and were pronounced dead at the scene. Borger’s backseat passenger, a 1-year-old, was transported to Dayton Children’s Hospital by Careflight, with the child’s condition unknown at this time.